In a year chock full of quality 3DS releases, can a licensed game stand out?

I went into Naruto: Powerful Shippuden expecting to dislike it. On the whole, licensed games that don’t have Batman in the title are known to largely be awful, and even though the various Naruto games have maintained a steady sense of consistency over the years, their quality relative to what the standards on the market demand from a new release has been steadily declining. On the whole, anime based games have suffered a steep decline in terms of perception and quality over the last few years, and I honestly did expect Powerful Shippuden to suffer from the same general trend.

It just goes to show you how pre conceived notions can be completely off. Naruto: Powerful Shippuden fully embraces the quirky side of its source material to deliver a charming, whimsical, and fun take on the universe it is portraying, that provides for a refreshing change from routine. By embracing the inherent silliness of the anime that it is based on, Powerful Shippuden manages to transcend its source and become a fun game in its own right.

But for starters, a clarification may be needed about said source material. Though the game is called Naruto: Powerful Shippuden (possibly in a bid to maximize sales), the actual game is based on the Naruto spin off series Rock Lee & His Ninja Pals, which is a more comic take on the Naruto universe, exaggerating and emphasizing its characters and their silly antics, something that is reflected in its visual style as well (retained in this game). Rock Lee & His Ninja Pals puts Rock Lee front and center, and sure enough, in Naruto: Powerful Shippuden, we find that Naruto has to share the spotlight with Rock Lee, with each character getting roughly half the campaign to their credit. 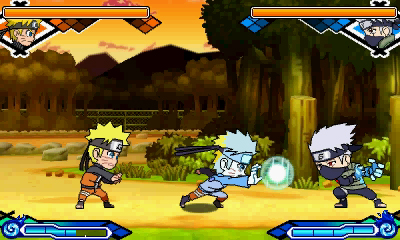 The campaign itself is split into two, depending on what character you choose to play as. Naruto’s storyline seems to at least try to be faithful to the anime, generally acting as good complementary material for fans, but taking what might be interpreted as a few liberties nonetheless. On the flipside, Rock Lee’s portions are batshit insane, confronting the players with some entirely contrived, nonsensical, and over the top scenarios and situations; in emphasizing the ridiculous nature of scenarios starring Rock Lee, these portions probably end up being more faithful to their source material than Naruto’s sections are to their. At least in spirit, anyway.

Rock Lee’s sections are a blast to play through: the game develops a sense of self awareness, and there is so much awkward humor and meta commentary that they are bound to elicit a laugh even from the most jaded gamer. In general, this is perhaps why Rock Lee’s sections are so much stronger and simply more fun than Naruto’s: freed from the shackles of trying to be faithful to the source material to appease legions of fans, they can go wild with their dialog and scenarios, and just aim to simply be fun.

I say that it’s the humor that makes Rock Lee’s sections better, because the actual gameplay seems to be of a consistent quality across both halves of the campaign. This is in spite of the fact that the two characters deliver entirely different styles of gameplay, with Naruto’s focus on ninja techniques delivering a complete contrast from Rock Lee’s preferred style of close quarters combat. Both characters end up feeling sufficiently distinct, and while you may prefer one over the other based on your own style of gameplay, both sections of the campaign are equal as far as objective quality is concerned. Naruto: Powerful Shippuden is almost certainly targeted at younger audiences, and this shows in its gameplay and mechanics. Unlike recent console Naruto games, which are highly complex fighters with a dedicated community, Powerful Shippuden is a side scrolling brawler with minor platforming and RPG elements thrown in. In what is probably the most daring step this game makes from a gameplay perspective, Naruto embraces a variation of the difficulty system that Kid Icarus: Uprising so ingeniously implemented last year, by allowing you to set certain conditions and parameters for yourself before you begin a stage, and yielding higher experience for your character if you meet said parameters.

It’s this kind of effort that separates Powerful Shippuden from the flood of anime licensed titles on the market right now: it’s not a cheap cash in, this is a well developed and well thought out game that would have stood strong on its own. The core gameplay in the game is so sound and so much fun for a simple brawler, that you can’t help but like it. Add to that the oodles of charm that the game has, in everything that it does, from its exaggerated visual style to its over the top scenarios, from its dialog and humor to the music and sound effects, and you’re just left with a game that stands as a highly competent brawler on its own merits. 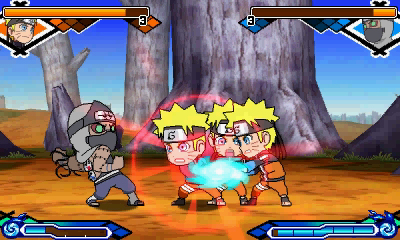 Indeed, that is perhaps the highest praise I can give Powerful Shippuden: even if you don’t like Naruto, or anime in general, you will probably find this game to be a fun outing. If you like Naruto, then your mileage with the game might actually vary based on what your opinion is on how it treats its source material.

But look past the anime trappings, and look at the license just as an excuse to justify the fun brawling that this game enables. In a year when the 3DS has had no dearth of great games, Powerful Shippuden unexpectedly adds another item to the growing list.

One half of the campaign is definitely more fun to play than the other half; many might not be happy with what they perceive are liberties taken with the Naruto license

Final Verdict:
GOOD
Against all odds, Naruto: Powerful Shippuden delivers a fun and charming experience.
A copy of this game was provided by Developer/Publisher/Distributor/PR Agency for review purposes. Click here to know more about our Reviews Policy.