Rockstar Support also indicates the game will be “fully functional and playable from the disc on PS4”.

Fresh off the news that Red Dead Redemption 2 will have a file size of 89.2 GB on the PlayStation 4, it also seems like the game’s physical retail version will apparently ship on two Blu-ray discs. Though not officially confirmed by Rockstar Games, a Reddit user posted images for the Japanese box art of the PS4 version. Sure enough, they indicate that the game will ship on two discs.

We’re inclined to take this with a grain of salt, but it’s not outside the realm of possibility. Over the weekend, the Microsoft Store listed the file size as 88.57 GB, which is again ideal for two Blu-ray discs. Keep in mind that details of a day one patch are still pending, so the total file size could be greater. Of course, this also doesn’t include updates for Red Dead Online, which goes live in November.

Interestingly, this revelation comes after a ResetEra user spoke to Rockstar Support, who noted that the game will be “fully functional and playable from the disc on PS4”. Another Rockstar support employee then indicated that a one-time login to Rockstar’s Social Club would be required to continue a gameplay session. In this case, it’s probably best to wait for full clarification from Rockstar.

Red Dead Redemption 2 is out on October 26th for Xbox One and PS4. 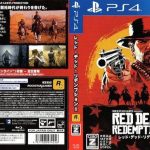 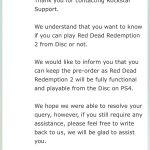 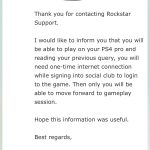