Over the last decade, Atlus has acquitted itself as a quality developer and publisher of some incredible games– their brands such as Persona and Shin Megami Tensei are more popular, and more importantly, better, than they ever have been before. People around the world sit up, their ears perked, when you mention ‘Persona’ or Shin Megami Tensei- the fact that the Persona games they are familiar with have a ‘3’ or a ‘4’ suffixed to them doesn’t seem to faze them one bit, in a clear defiance of conventional wisdom. To these people, the series’ roots, whatever they were, are mysterious, obscured, and irrelevant.

But these roots do exist- they just never made it to the west, thanks to prevailing market sensibilities of the time. But all of the Persona and Shin Megami Tensei games, indeed, all games that Atlus ever made, can trace themselves back safely to this one game- the original Shin Megami Tensei, released in Japan on the Super Nintendo Entertainment System, and an immediate hit that kickstarted a franchise, as well as all of its spin offs and sub franchises, none of which would achieve international notoriety until nearly two decades later.

But given the newfound popularity of Shin Megami Tensei and Persona, as well as the newfound popularity of cheaper, safer (from a financial perspective) methods of content delivery, Atlus has decided that the time was right to bring over the grand daddy of all our present day beloved Atlus RPG experiences to the west- Shin Megami Tensei was released on iOS for the first time in English, billed as an enhanced version of the GBA port of the game, which in turn was a port of the PlayStation version, which in turn derived from the Super Nintendo original. The game, therefore, has a long history, none of which we are familiar with, or matters to us. I guess when buying this game, the question will be- is this game worth more than a passing curiosity for series and RPG fans? Or does it actually hold up on its own merits and provide for a fun, playable experience, the kind we have come to experience from Atlus? 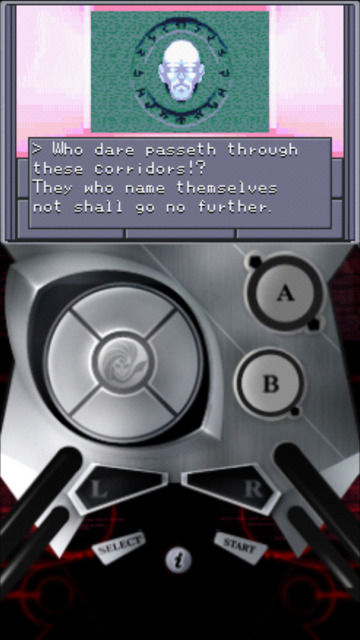 "Shin Megami Tensei on the iOS is a relic of a bygone era preserved mostly in its entirety. As such, its game design is riddled with instances of mechanics and choices that maybe made sense for a console RPG back in 1992, but simply don't apply to a modern game- especially not to a game being played on an iOS device, which, I need to point out, is a mobile device."

Objectively, the answer tends more towards the former than the latter- much like Shin Megami Tensei: Soul Hackers on the Nintendo 3DS last year, Shin Megami Tensei on the iOS is a relic of a bygone era preserved mostly in its entirety. As such, its game design is riddled with instances of mechanics and choices that maybe made sense for a console RPG back in 1992, but simply don’t apply to a modern game- especially not to a game being played on an iOS device, which, I need to point out, is a mobile device.

This must be remembered- more than even handhelds, which are enjoyed at home by their audience as much as on the move, iOS games are played by people in short bursts- often for just a few minutes. Any game, therefore, that is put on an iOS device, must make concessions to that fact. Notably, in the case of Shin Megami Tensei, the game experience is hindered by Shin Megami Tensei’s unforgiving save system, which simply does not allow the player to save the game in a dungeon. Considering the fact that the majority of the game takes place in dungeons, this poses a significant problem- you could often go for hours before you got the chance to save again, so you’re faced with the unpleasant prospect of losing all progress every time you exit the game if you haven’t yet reached the next save point.

This would actually have been an issue even if this wasn’t an iOS game- the save system in this game is broken by modern standards. The save points are simply too far spaced- again, this would probably make sense in 1992 (although even then, I wager the game would have been harder than other games on the market simply because of the save system), but today, on a mobile device, it’s brutal.

The issues with the save system aside, the game also suffers from one other, unlikely problem- touch controls. Shin Megami Tensei is a turn based first person dungeon crawler. By all accounts, this game is perfect for an iOS port- touch screen only controls work very well for turn based games, as they don’t require twitch based precise inputs from players. But somehow, the touch controls in this game are a little screwed up.

The controls are all crammed on the bottom of the screen unceremoniously- this makes playing the game on an iPhone or iPod Touch an unsatisfactory prospect. iPad is where they shine, however, with enough screen estate per ‘button’ and for the game itself, and playing the game on landscape orientation does allay the problem somewhat. 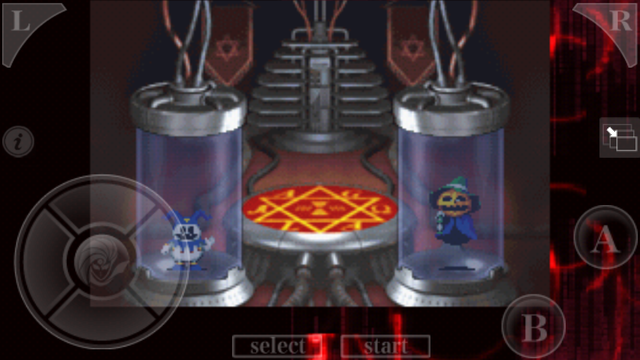 "In spite of all these issues, once the game gets going, it pulls you in."

This in itself doesn’t change that the character movement and control feels clunky- heavy feeling characters are sort of a hallmark of the Shin Megami Tensei games, but for whatever reason, here it stands out more. Maybe because touch controls lack the tactileness of physical controls, or maybe because the game actually is clunkier owing to being the first in the series, but moving the character often feels slow and lagged.

After all of this criticism, you might have determined that the game probably isn’t worth your time. Hold it right there- I didn’t say that. I was just pointing out the objective issues with the game as they are. In spite of all of these, however, I would recommend the game to JRPG or series fans, especially if they have an iPad, and can plan their sessions so they can play it for a few hours at a time. You see, in spite of all of these problems- a poor save system, bad controls, clunky character movement- once the game gets going, it pulls you in.

Shin Megami Tensei is the earliest instance of the now familiar context- demons attack Tokyo, all hell breaks loose, you must determine the fate of the world. Along the way, you will fight demons, recruit them to fight by your side, fuse them to create stronger demons, and eventually, based on how you morally align yourself, bring chaos to the world. 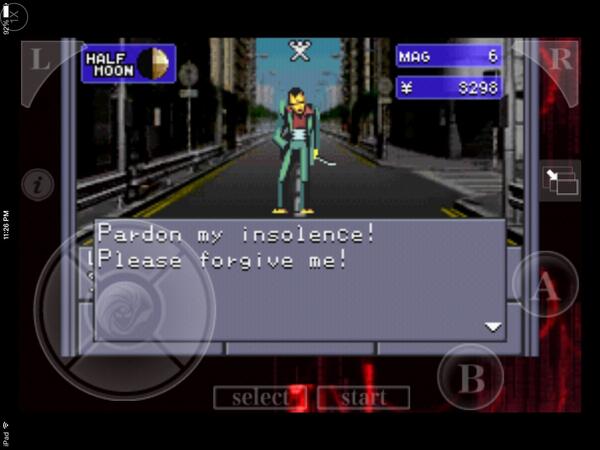 "All of this is wrapped up in a deep, philosophically provocative, and thematically satisfying story."

The gameplay itself is nuanced too- as mentioned above, there’s a whole lot to keep track of, and it’s best to always keep track of your bearings. A lot of these aren’t as refined or complex as they would be in, say, Shin Megami Tensei IV, especially since they represent the first instance of these appearing at all, but they are sufficiently engrossing (although the game itself, in something that again betrays its age, be completely obtuse at times with its hints and intended progression. Too many times, you will just find yourself at a complete loss as to where to go).

All said and done, would I recommend Shin Megami Tensei to the average mobile gamer? No, not even close. This is not a game meant for the regular Angry Birds/Doodle Jump/Flappy Bird/Temple Run player. But if you’re a fan of either Atlus or JRPGs, and own an iOS device (especially an iPad), then Shin Megami Tensei is heavily recommended- you might think it just a historical curiosity, but its good game design that has largely stood the test of time, in spite of a poor save system and bad touch controls marring the experience somewhat.

This game was reviewed on iPad and iPod Touch.

Great storyline, nuanced, complicated gameplay that still holds up, great piece of history as the root of modern Atlus

Terrible save system, poor touch screen controls, a lot of the game has aged poorly

Highly recommended for all JRPG and Atlus fans.

A copy of this game was provided by developer/publisher for review purposes. Click here to know more about our Reviews Policy.
Tagged With: Atlus, iOS, other, Shin Megami Tensei