Promises a "bunch of things that should make everyone a little bit happy". 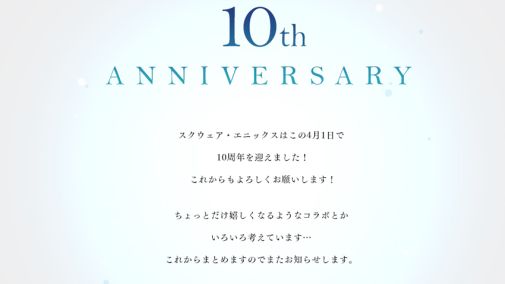 Square Enix, in the midst of multiple troubles such as CEO Yoichi Wada resigning and projected losses over the next year, hasn’t exactly been doing so great. However, it’s important to note that the company has been around for a long time. In fact, the developer/publisher will be celebrating its 10 year anniversary.

It’s since launched a site for the same.

“As of April 1st we’ve reached our 10th anniversary! We hope you’ll continue supporting us going forward as well! We’re thinking of collaborations and a bunch of things that should make everyone a little bit happy. It’ll be settled soon, so we’ll keep you posted.”

The “collaborations” part is interesting but we’re even more interested in all the things they have planned for 2013. Hopefully we’ll see some of those big-name, AAA console titles this year. So far, Final Fantasy X/X-2 Remastered releasing for PS3 and PS Vita will kick off the selection.