Nintendo themselves seem to have spilled the beans.

Super Smash Bros. Ultimate has been on something of a hot streak as far as its DLC fighters are concerned. After kicking things off with Persona 5’s Joker, and the moving on to Hero from the Dragon Quest franchise, the fighter will soon be adding Banjo-Kazooie (something that a lot of fans are looking forward to).

But what’s next? Nintendo usually likes to keep things pretty close to its chest, but they might have let slip on the nature of the fourth character they’ll be adding to their massive crossover fighter. On the official Nintendo UK page for Challenger Pack 4 for Smash Bros Ultimate (which has since been taken down), the description for the DLC mentions a copyright for SNK Corporation. You can see a screenshot below. It’s also worth noting that similar copyrights can be seen on other challenger packs too, such as for Square Enix on the Hero Challenger Pack page.

Of course, this narrows things down only by a little bit. Even if this does indeed end up being an SNK character, there’s any number of characters this could be. It’s worth noting that SNK’s Samurai Shodown launches for the Switch in December, so maybe this could have something to do with that.

Either way, stay tuned to GamingBolt, and we’ll let you know what it’s all about as soon as we know more. 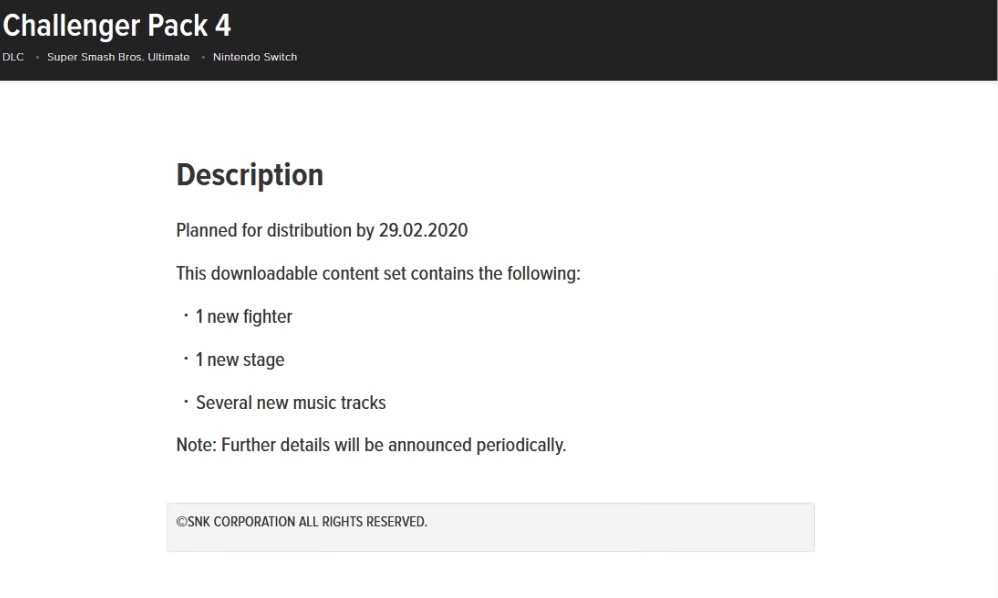