While the psychological horror game by LKA is set to release this month, the developers have announced that the PlayStation versions of the game will be censored, resulting in a delay for the physical...

You don't hear that one too often. 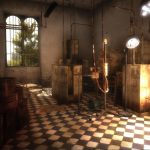 The Town of Light: Deluxe Edition is Coming to Nintendo Switch

The Town of Light Interview: A Guiding Light