The Elder Scrolls 6: What The Teaser Trailer Tells Us

An in-depth analysis of the teaser trailer of The Elder Scrolls 6.

We’ve seen a lot of hype and anticipation about an Elder Scrolls 6 over the last year or so. Basically no real information has come out though. No confirmed leaks or anything like that, but lots of speculation and fan theories have been floating around to say the least. The appetite for a sixth game makes a lot of sense too, as it does feel like the timing is right for Bethesda to finally move on with its iconic blockbuster franchise. Skyrim is certainly a great game as it has been ported to just about every machine you can think of from the past many years, and done well on them all.

The game had successfully crossed over two generations of consoles, a plethora of mods, a full on remaster, and even a switch version. So with Skyrim being milked for much longer than any other game of that type in recent history, it’s more than reasonable for fans of the franchise to be expecting a new legitimate iteration. Thankfully, we do appear to be getting what we want with a proper Elder Scrolls 6 sometime in the future. The world was alerted to this fact via a 37-second teaser trailer shown at Bethesda’s E3 conference last month, and as to be expected, the trailer was pretty cool. Unfortunately it didn’t really seem to serve much of a purpose other than to let us know that the next game was coming. 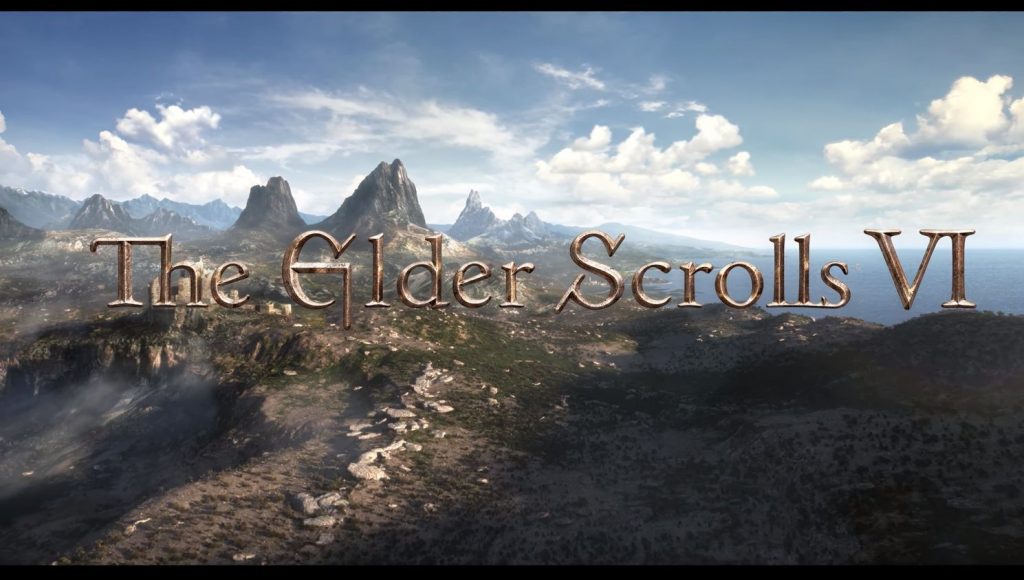 Many noted the vagueness of the trailer right off the bat. No characters were revealed, no voices or hints at a plot, either. Hell, even the title reveal lacked the subtitle that Elder Scrolls fans are used to with these games that go all the way back to Elder Scrolls 2: Daggerfall. Elder Scrolls 3 was Morrowind, Elder Scrolls 4 was Oblivion, and Elder Scrolls 5 was Skyrim, so what will Elder Scrolls 6 be? Where will it take place? What will it be like? As much as everyone enjoyed seeing the trailer, and rightfully so, we just don’t have solid answers to any of these questions from what we were given. Surely this isn’t an accident.

It’s pretty difficult to say anything for sure, but one cane make some logical assumptions about general concepts that the game seems to be adopting. Firstly, As the trailer does begin with the camera taking us through billowing clouds and mist, the first thing that is made readily apparent is the enormous scale. Yes, Elder Scrolls games are generally quite big so thats not a very risky assumption, but it looks like the developers are well aware of games that have challenged Skyrim in terms of scope over the years like Witcher 3, and they intend to reclaim the throne of vastness and monumental scale. This makes a lot of sense for Bethesda to want to do, since the never-ending arms race of which game has the biggest open-world environment is often reinvigorated every time an elder scrolls game comes out.

Another notable moment was when the fog cleared, and the vast world could be seen. Granted this is a cinematic trailer and probably not in-game footage, but the amount of variety in the landscapes that we’re seeing here certainly stood out to many and it appears that Elder Scrolls 6 is going to continue to raise the stakes when it comes to diverse locations, topography and overall size. Caves, lakes, mountains, forrests, pennensulas, towns, and even what appears to be an ocean front can be clearly seen in the main shot of the trailer. The fact that they went out of their way to display this variety of landscapes should indicate that variety is indeed something we should expect with respect to the locations we can travel to in the new game, and thats a good thing. Many games have strived to achieve the diversity that Skyrim did, and it’s true that several games have, so it would make plenty of sense for Bethesda to want to one-up all of the massive open-world RPGs that have come and gone in the post-Skyrim world.

The music also brought in the familiar melody that Elder Scrolls fans have been hearing for years now. But it’s clearly a re-recording of the recognizable tune, with more emphasis on beartone and bass brass instruments, giving the theme more depth and power than the way it sounded in Skyrim. So, based on this, it’s probably more than safe to bet on a killer score to accompany our travels through the world. Perhaps some new tunes could steal the show for the audio. We’ll have to keep our ears open as more footage of the game becomes available. I’m sure many memorable sweeping moments of auditory bliss are on the way.

Also, as I mentioned before, we don’t have a subtitle. No location name. I would be shocked if there just wasn’t one though, so the logical conclusion we can make at this point is that a subtitle is being held back for whatever reason. Perhaps one isn’t even selected yet? If thats the case, then maybe Elder Scrolls 6 is much further off than we would like, this would be in direct contrast with the marketing cycle that Bethesda has been adopting with their games lately though. Wolfenstein 2, Prey, and The Evil Within 2 were all announced within a reasonable amount of time of their launch, so perhaps this bit of information is still up in the air, and maybe a location and subtitle are indeed decided upon, but are just being held back for other reasons. Again, only time will tell, but many theories are already popping up that put the game’s primary setting in Hammerfell, as the layout of that particular land does have multiple similarities to what we’re seeing on screen in the trailer.

Again this is all speculation on our part, as trailers like this are meant to be glanced at for the masses and picked apart by journalists, pundits, and hardcore fans. One thing is for sure though; we all have plenty of reasons to be excited for the next edition of this long-running series. The Elder Scrolls games tend to serve as major benchmarks that other games strive to meet for years after their release, and most of them fall short. They stand the test of time for years and inspire many other great worlds into existence. So for another entry of this franchise to be on the way should fill all gamers with hope and excitement for the future.