Travel to Toussaint for one last final adventure with the Witcher.

Saying goodbye is never easy. Just ask Geralt of Rivia who had to do it a number of times in The Witcher 3: Wild Hunt, regardless of the choices made. It’s going to be even tougher for fans of last year’s critically acclaimed open world action RPG to say goodbye to our favourite witcher. That being said, CD Projekt RED is preparing an amazing send-off for the White Wolf in Blood and Wine, releasing on May 31st for Xbox One, PS4 and PC. There’s plenty to look forward to including a new region Toussaint that’s just fraught with danger.

GamingBolt had a chance to speak to CD Projekt RED senior writer Karolina Stachyra about the various aspects of Blood and Wine, it’s overall length and what players can look forward to. 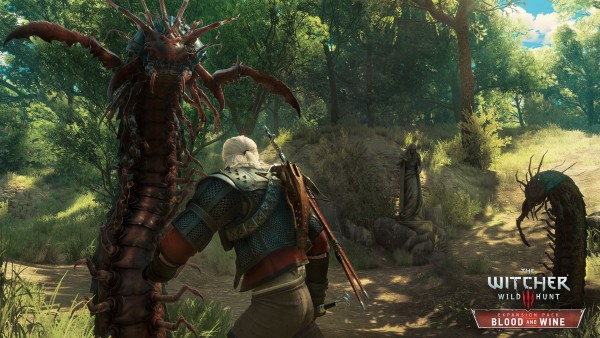 "Hearts of Stone was full of stuff a witcher would not normally do ­­ a wedding? Deals with the devil? Toussaint is kind of like that."

Several awards later, we are finally on to the last piece of content for what is this generation’s greatest game. How do you feel?

Karolina Stachyra: Flattered that you’re calling Wild Hunt this generation’s greatest game, that’s for sure! We feel great, it’s the last stretch, so we’re tired, but definitely feel great. Blood and Wine is Geralt’s final adventure, and we have some really awesome stuff up our sleeves to send him off with a bang!

With the support that Hearts of Stone received, what’s the current studio vibe with Blood and Wine? Did anything change in development or was there a desire to go even “bigger” than before?

Karolina Stachyra: Making Blood and Wine bigger than Hearts of Stone was the plan all along. When we announced the expansions way back, we estimated that Hearts of Stone would provide about 10 hours of content, and Blood and Wine would double that. I mean, we’re introducing a whole new region after all ­­ it needs to be filled with the stuff The Witcher fans love: quests, monster hunts and secrets when they’re on the road.

What can you tell us about Toussaint at this stage and how it will play into The Witcher 3‘s universe?

Karolina Stachyra: You know how we like to play with convention, right? Hearts of Stone was full of stuff a witcher would not normally do ­­ a wedding? Deals with the devil? Toussaint is kind of like that. It seemingly doesn’t fit The Witcher world ­­ it’s just so… happy. They don’t have an army, only wandering knights, they’re always drinking wine and not caring about anything, really. And this is where it gets twisted: death comes to the land of summer, things start happening, people are dying. Guess who they’re gonna call? And it’s only the tip of the iceberg.

With this a major new area for The Witcher 3, what kind of scale can players look forward to? Is it more along the lines of Velen or scattered like Skellige?

Karolina Stachyra: It’s going to be big. Remember the feeling you got when when it dawned on you Velen is not the only place you’ll traverse in Wild Hunt, when you saw Skellige? I’m not comparing both in sizes, just trying to work on your imagination. Hopefully, you’ll feel that again. 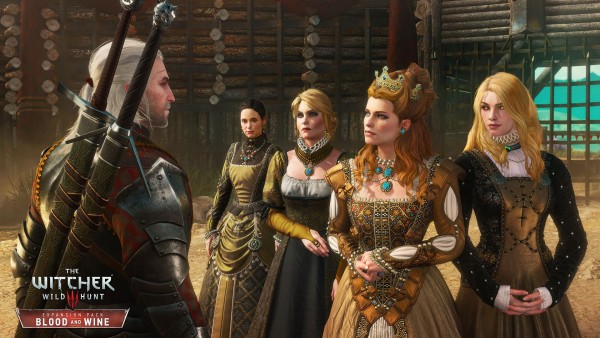 "One of the new mechanics that I like are witcher armor dyes. For me, being a witcher means always being on the road. You have your gear, your swords, your potions. It’s you and the unknown, right?"

Hearts of Stone was praised for the design of its side quests and story missions, especially with regards to their unique nature. What kind of unique scenarios can be expected in Blood and Wine?

Karolina Stachyra: For those of you who had not yet finished Hearts of Stone, beware, here be spoilers! The story told in Hearts of Stone was divided into distinctive parts: first you made the deal with Mr. Mirror, then there was the wedding, then the heist, and the Mansion. Although each of them propelled the story somehow, they were not exactly connected with each other. It’s different in Blood and Wine. BaW is not broken up into distinctive pieces, but more seamless in the way the narrative flows. It plays with you, twists things when you expect that the least. And it’s definitely more grim, despite Toussaint itself is very fairy tale in nature.

What kind of new mechanics can be expected in Blood and Wine? Will there be anything like Runewords? For that matter, will we see new types of Runewords?

Karolina Stachyra: One of the new mechanics that I like are witcher armor dyes. For me, being a witcher means always being on the road. You have your gear, your swords, your potions. It’s you and the unknown, right? What I love about dying your stuff is the sense of personalization it adds to that on­ the ­road experience. I know that’s an out­ of ­place comparison, but it’s a bit like soldiers customizing their equipment. Geralt’s not a soldier, but he’s a professional, he does that, too. That really adds to the RPG experience for me.

What kinds of new Gwent cards can players expect, if there are any at all?

Karolina Stachyra: Ever wanted to play with a Skellige deck? Well, I know from a well informed source that soon you’ll be able to!

The length of an expansion is always questioned in this day and age but CD Projekt RED proved that value is as important with Hearts of Stone. What will be the goal with Blood and Wine given its relatively larger size?

Karolina Stachyra: We estimate that it will take gamers about 30 hours to finish the main story arc of Blood and Wine.

"This is Geralt’s final quest, yes. But there’s a ton of stuff you can dig into like comic books (House of Glass and Fox Children), you’ve got the board game, which is pretty cool. And, if you’re like me, you can always re­-read the books!"

What kind of new content can be expected after the release of Blood and Wine? Will support continue till 2016 end?

Karolina Stachyra: We’ll definitely support the game as a whole. In terms of expansions, Blood and Wine is Geralt’s final quest.

Can fans expect an Enhanced Edition of The Witcher 3 to release later this year with all the expansions include?

Karolina Stachyra: Oh, this not a question for me, really.

With this being the final expansion pack, is it time to say good bye to our good old Geralt of Rivia?

Karolina Stachyra: This is Geralt’s final quest, yes. But there’s a ton of stuff you can dig into like comic books (House of Glass and Fox Children), you’ve got the board game, which is pretty cool. And, if you’re like me, you can always re­-read the books! *laughs*

You have slowly but surely started to speak a bit about Cyberpunk 2077. Now I won’t push you to reveal all of it, but how different is it from The Witcher experience?

Karolina Stachyra: Let’s see… it’s in the future, it doesn’t have Geralt as the main character, and it’s not set in a fantasy world (although the world is fantastic!). Does that answer your question? *laughs*

Is there anything else you want to tell us to The Witcher 3 fans before we let you go?

Karolina Stachyra: We love you guys and gals! Thank you for playing The Witcher and I hope you’ll have an amazing time playing Blood and Wine!