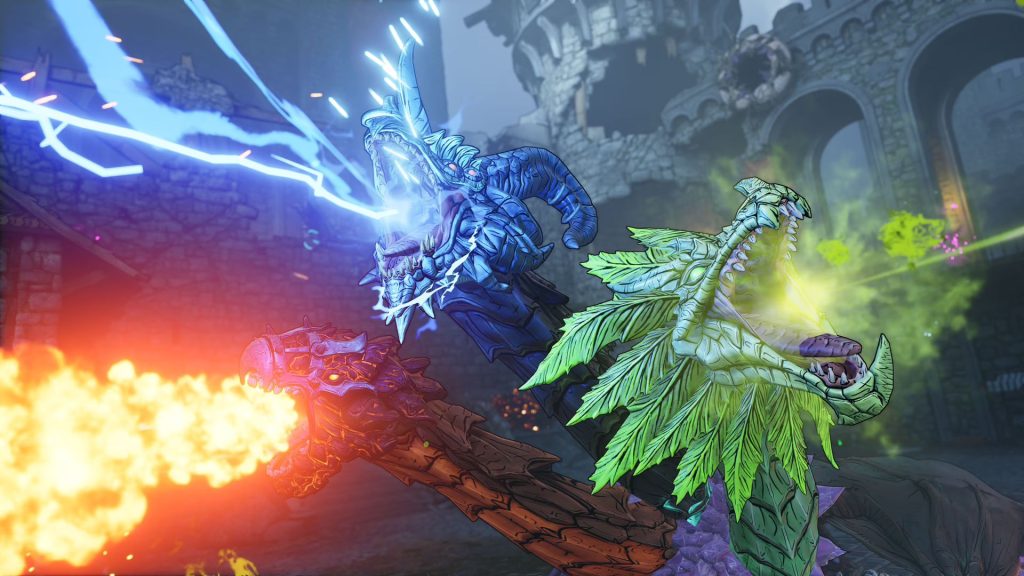 The fourth and final paid DLC for Tiny Tina’s Wonderlands is now available on all platforms. Shattering Spectreglass introduces a brand new class in the Blightcaller which is capable of summoning Plaguestorms and harnessing spirits with the Bog Totem turret. Poison is their forte but their Class Feat, Whisper of Rot, also provides elemental damage boosts when applying Status Effects.

The DLC also includes the fourth Mirror of Mystery, which sees players going into a difficult dungeon to face Redmourne the Trivern, a three-headed dragon that can use multiple elements. Like the other Mirrors of Mystery bosses, Redmourne gains more powerful forms and new attacks over the next few weeks. However, this also means new loot to earn. Check out his schedule below:

Completing the Shattering Spectreglass dungeon once adds its four level layouts and Redmourne to the Chaos Chamber, providing more variety in the endgame dungeon. If that weren’t enough, the DLC also provides a new voice option “The Grim” and four new backstories for starting stats: Nerfed by the Bunkermaster, Clownblood, Apprentice Barnacle Scraper, and Street Urchin Success Story.

Tiny Tina’s Wonderlands is available for Xbox One, PS4, PS5, Xbox Series X/S, and PC. Check out our official review here. Gearbox hasn’t said anything about additional DLC but stay tuned for any announcements in the future.