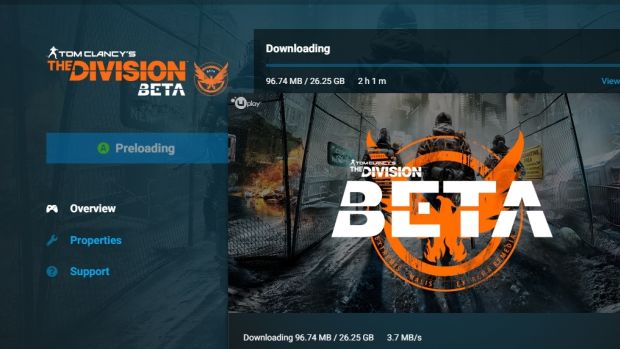 Tom Clancy’s The Division will have a closed beta on January 28th for the Xbox One and January 29th for PS4 and PC but there’s been a ton of information revealed about the game in the past few days. The newest major detail is the beta’s size, at least on PC. According to a user on Reddit, who posted a screenshot from UPlay, the beta is 26.25 GB on PC.

The size is pretty close to the Xbox One alpha that took place last month, which was 23.2 GB. The screenshot came from a user with early access to pre-loading the beta client and it’ll be interesting to see what the size of the final game will be in the coming months.

Tom Clancy’s The Division will be releasing on March 8th for Xbox One, PS4 and PC. Thus far, Ubisoft Massive has revealed that it won’t have player trading at launch, more difficult content outside of the Dark Zone exists and some activity (possibly raids) is in the works for hardcore players.