Posted By Kartik Mudgal | On 16th, Aug. 2011 Under News | Follow This Author @KartikMdgl 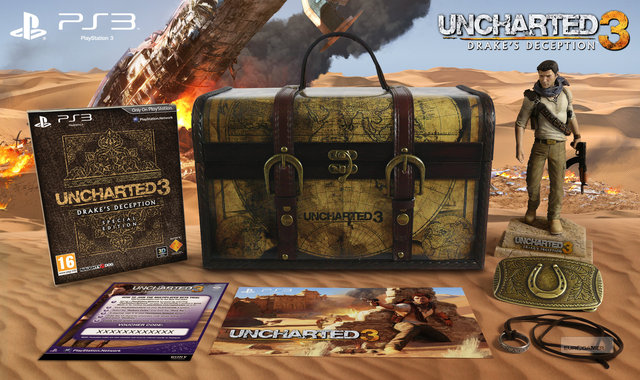 Uncharted 3 Explorer Edition is priced at 104 pounds and features a wooden box that can store 19 PS3 games. Of course the games aren’t included.

Also included is a replica of Nathan Drake’s belt buckle, which is “wearable”, and a full-size replica of Drake’s necklace strap that holds Sir Francis Drake’s ring. On top of all that, you’ll get a Nathan Drake statue (not full-size), the Special Edition journal-styled game box case and a voucher for various bits of digital content.

They are the London Drake Skin and Pirate AK-47 Weapon Mod for multiplayer; an Upper Cut Taunt gesture; a Cash Multiplayer boost for online and a Special Edition Decals Pack for your avatar’s accessories.

Look out for more Uncharted 3 footage at GamesCom.