The competition heats up for the next generation of consoles.

Do the next generation consoles from Microsoft and Sony really exist? Whether you believe they do or not, there’s no denying that there’s a fair amount of hype and speculations surrounding them. Why, The Verge recently ran a story on how the Xbox 720 will feature the next generation Kinect and Kinect Glasses (which can only be something along the lines of Google’s Project Glass and looks to bring Augmented Reality to mainstream consoles), along with more accessible design for casual gamers. But that’s not all. 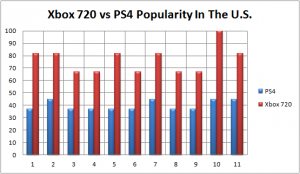 A chart has also been compiled which showcases the amount of search queries and interest generated for the Xbox 360 versus Sony’s Playstation 4. The chart looks at the number of information searches in Google (y-axis, in millions) over the last 11 months (x-axis). As can be seen, the Xbox 720 outstrips the Playstation 4 greatly.

Of course, we won’t know the true state of demand worldwide until both consoles are released, since the PS3 has consistently outperformed the Xbox 360 in Japan. Will this trend continue into the next generation? We’ll see when E3 2013 approaches.