Deathloop – 15 Things You Need to Know

Venture to Blackreef Isle and break the loop in Arkane Lyon's upcoming FPS. Here's everything you need to know before its release.

Originally meant to release in November 2020, Bethesda’s Deathloop is finally set to launch on September 14th for PS5 and PC. As one of the few big releases that hasn’t been delayed to next year, not to mention a major PS5 exclusive, what do you need to know before picking it up? Let’s go over 15 different things here.

Deathloop’s story isn’t one of honor or revenge. It’s about an assassin named Colt who comes to Blackreef Isle to take down eight targets, known collectively as the Visionaries. Of course, it’s never really that simple. Thanks to military experiments that occurred in the past, time resets on the island after a set period. The Visionaries are thus looking to party forever, committing all kinds of debauchery in the process. Colt’s goal is to take them all out before the clock strikes midnight – leaving anyone alive will reset the loop and undo everything. Dying will reset the loop as well.

Strangely enough, Colt retains his memories between each loop, allowing him to utilize any information to his advantage. But along with the Visionaries and other party-goers, the player also has to contend with agent Julianna Blake who’s out to protect the loop.

Each Visionary has their own unique motif and routine on Blackreef, along with powers provided by the AEON Program (which Colt can claim by killing them and taking their Slabs). The ones we know thus far include Aleksis “The Wolf” Dorsey who’s all about wolves, right down to having a masquerade party with wolf masks in the Updaam district. Egor Serling is the founder of the AEON Program and mostly holed up in his lab, seeking attention but also wanting solitude away from the crowd. Ramblin’ Frank Spicer is a radio DJ and hangs out in his studio, broadcasting throughout the island. Then there’s Julianna who simply wants to kill Colt, preventing him from ending the loop. Other Visionaries like Charlie Montague, Harriet Morse and so on have yet to be detailed but should also provide their own unique powers. 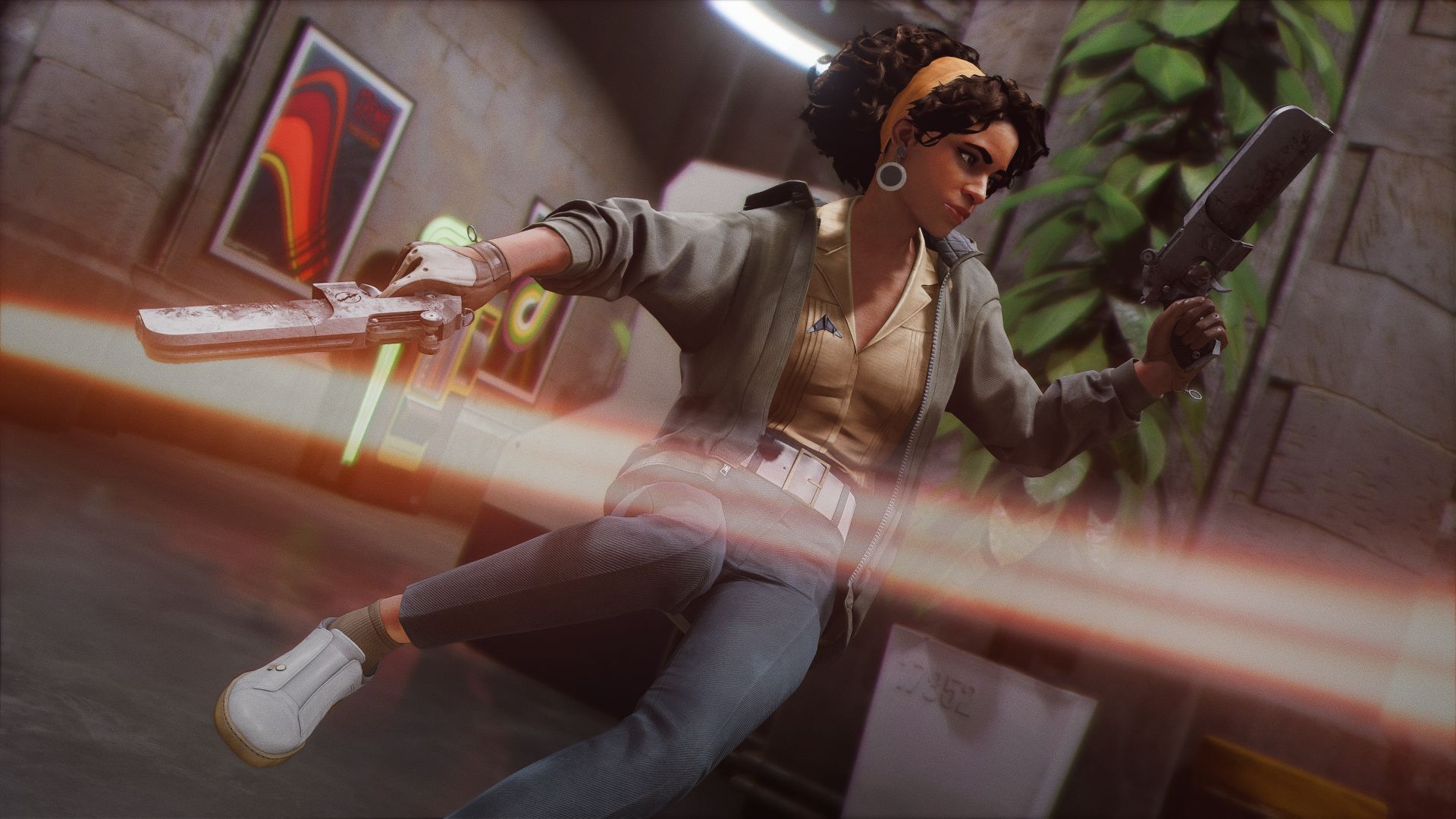 Of the various elements bouncing around in Deathloop’s story, Julianna is perhaps the most intriguing. She’ll converse with Colt, insulting but also playfully teasing him on the radio. Along with being heavily armed, she can take on the appearance of other NPCs. Just when you think you’re safe, Julianna may suddenly appear and try to kill you. As director Dinga Bakaba revealed in a PlayStation Blog article, she’ll “appear and disappear” at random, play some mind games and maybe even provide some weapons.

Things get even more interesting when taking the invasion-style multiplayer into account. Another player can control Julianna and invade one’s game to kill them. Furthermore, Julianna has her own story content that’s revealed when playing her, providing more context for some scenarios (but don’t expect a second campaign). Of course, you can still play offline, which leads to her being controlled by the AI, if you so wish. 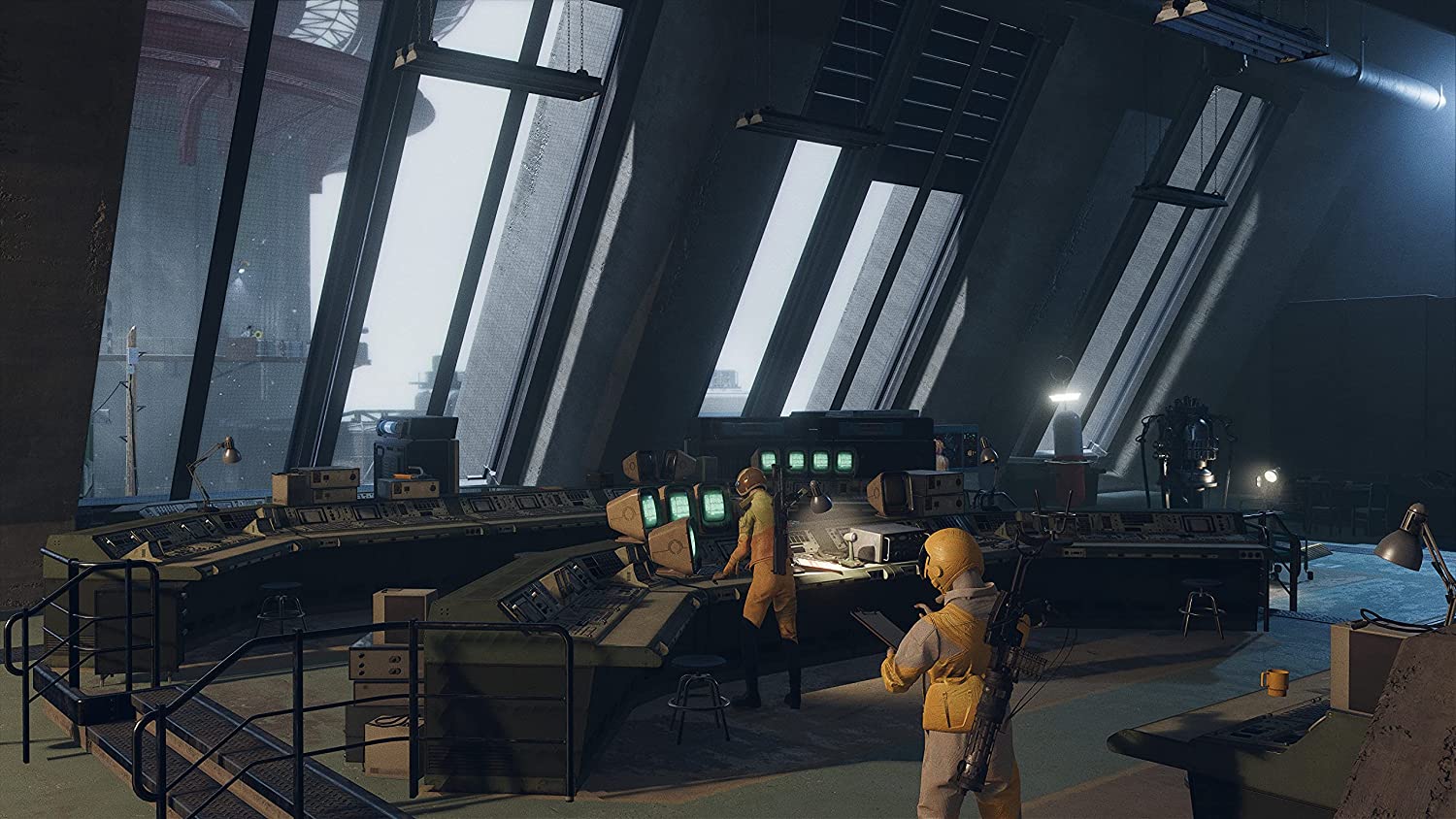 Blackreef Isle is divided into four districts and each has their own unique stories and Visionaries to take down. As you enter a district, you’ll have an unlimited amount of time to explore and gather leads for your investigation. You may choose to assassinate Aleksis or gather more information to get Egor in the same run. Districts will change depending on the time period, which is also handled in a very unique fashion.

A typical day in Deathloop is broken up into four time periods and depending on when you visit a certain District, the activities, routes and targets may change. Every time you leave a District, time advances forward to the next period but you can also skip ahead further, choosing to go directly to the evening from the morning time. Certain decisions can also have repercussions – the best example is that saving a certain character early in the day results in them opening a door later to access a new area. 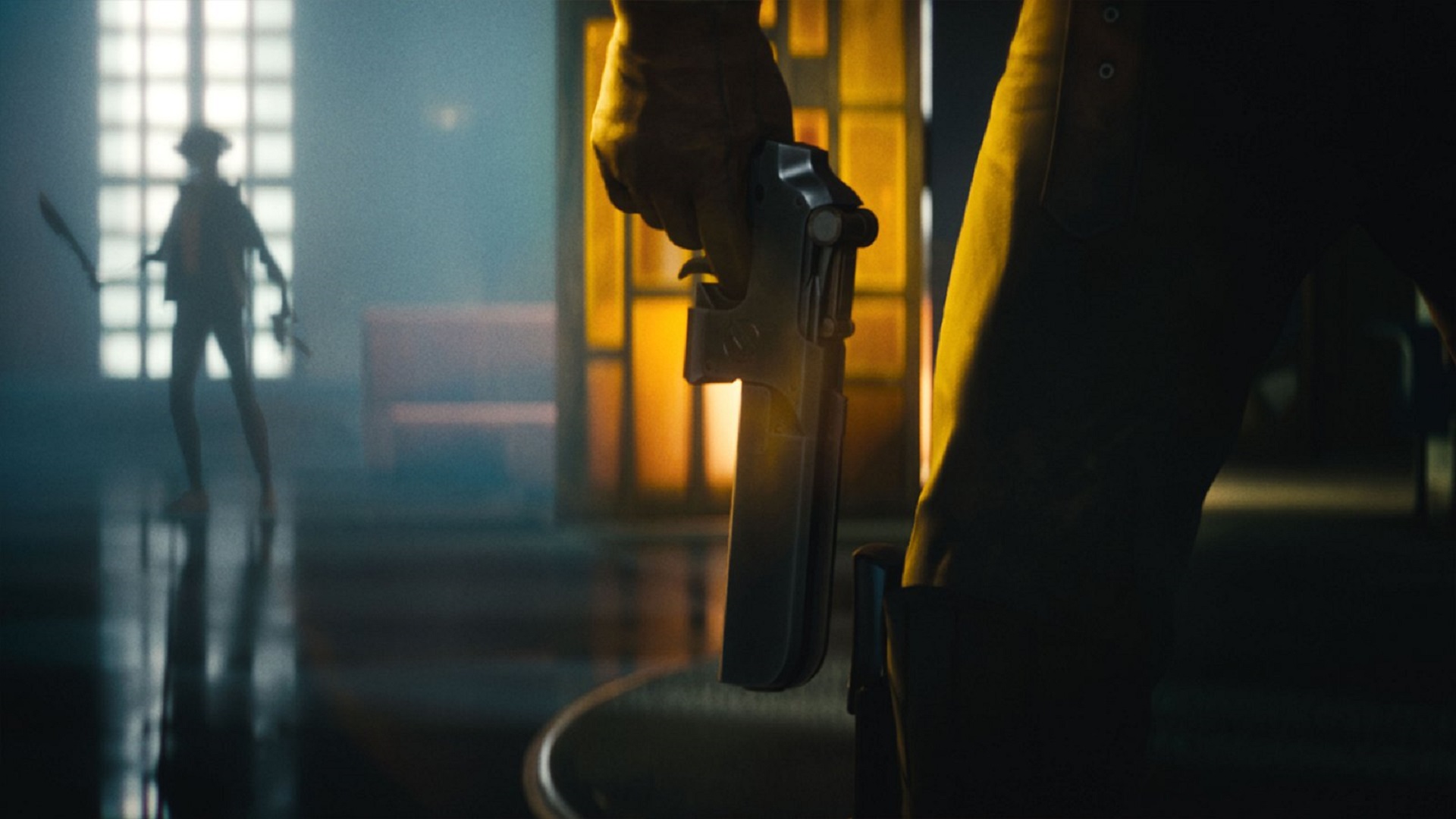 While the team at Arkane Lyon doesn’t consider Deathloop to be a roguelite title, there’s no denying the similarities. Dying resets you to the beginning of the day and Colt can only carry three weapons and two powers at a time in each “run.” Killing Visionaries also bestows Residuum which can be spent on retaining certain powers and items throughout different loops. However, the emphasis is really on knowing your targets, mastering the environments and taking them all out in one fell swoop as opposed to getting to the “final area” in a run. 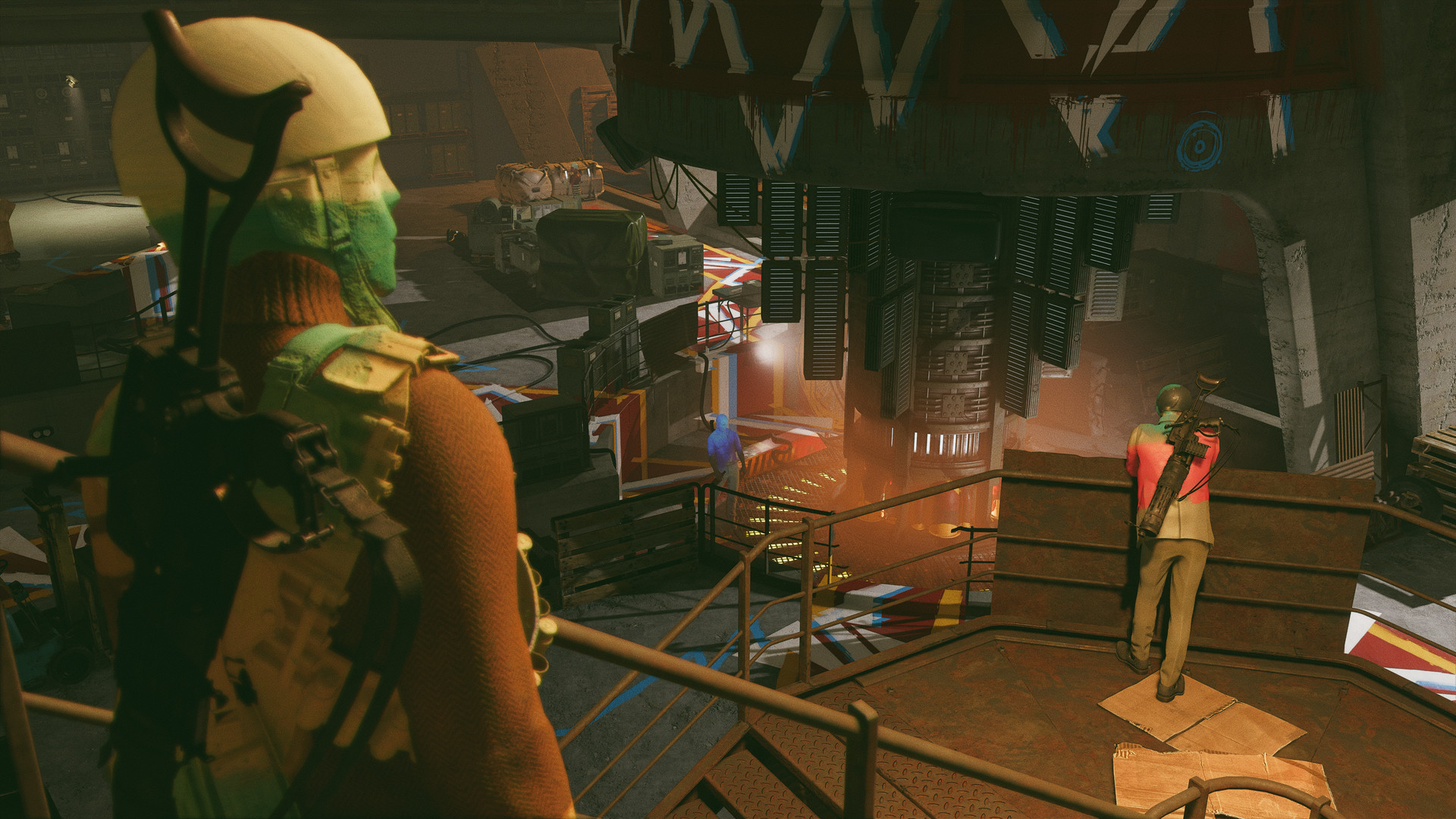 If there’s one thing that fans of Arkane Studios’ previous games will like about Deathloop, it’s the amount of freedom that the sandbox has to offer. You can either go in, guns blazing and take out enemies like a traditional first person shooter, or opt for a more stealthy approach. Reach alternate paths by platforming, go invisible or use different tools (like one that allows for hacking turrets) to avoid direct conflict with foes.

Among the variety of weapons that Colt uses is the Fourpounder, a Desert Eagle-style handgun that can be dual-wielded; the PT-6 Spiker which, as the name implies, shoots spikes and is good for silent kills; the Heritage lever-action rifle; and the LIMP-10, an SMG. Snipers will like the Rapier, a single-shot weapon that deals massive damage over great distances, while the Vopat Trencher is a pump-action shotgun that offers close-range stopping power. Of course, you also get melee weapons like the Machete for chopping foes up. 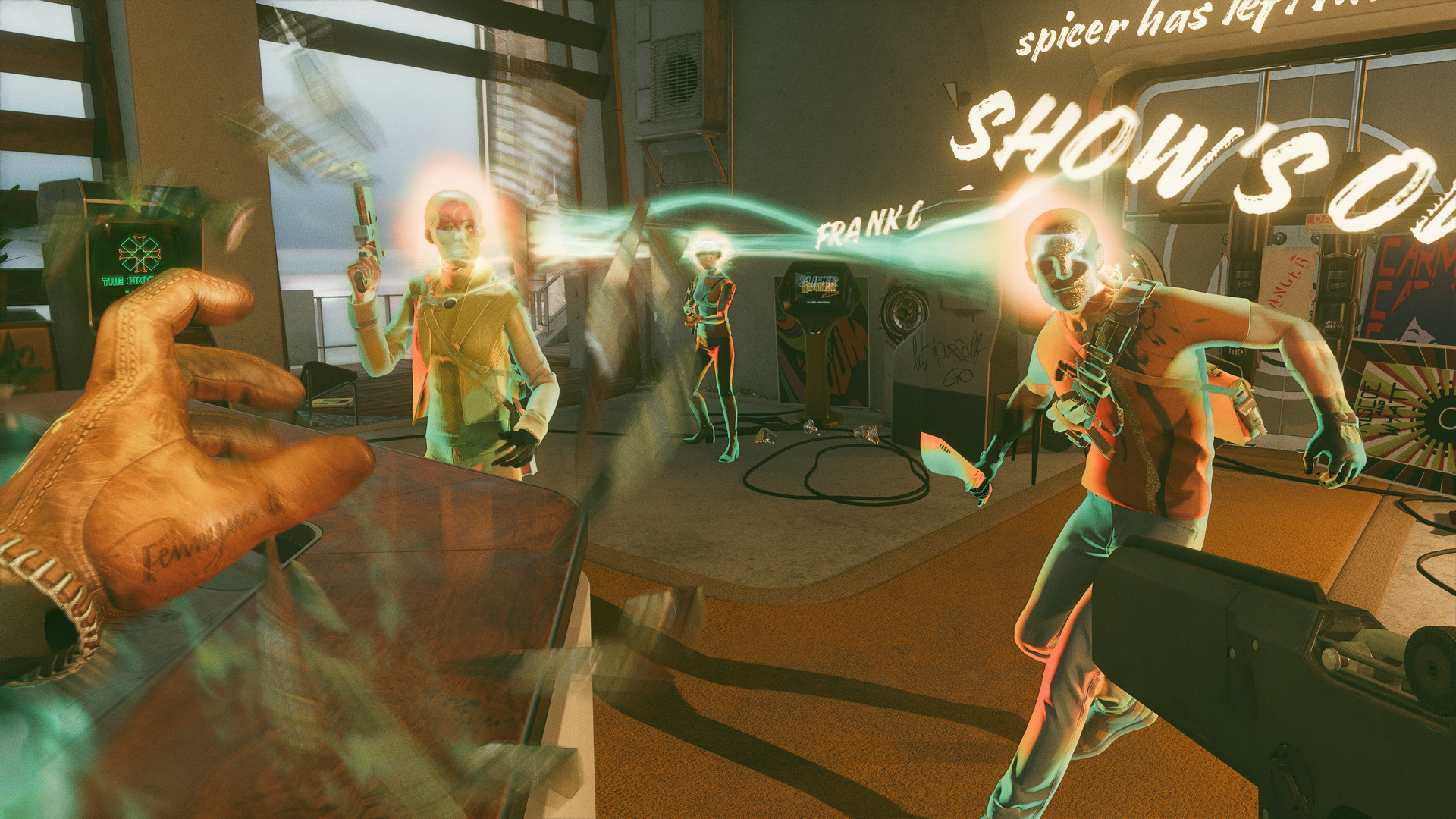 As you take down various Visionaries, you’ll net their Slabs which grant different powers. Thus far, we know about Aether which turns Colt invisible to both enemies and turrets; Shift for blinking across short distances (a la Dishonored); and Karnesis for telepathically tossing foes around. There’s also Reprise, which has two charges and revives you upon death to wherever you were several seconds prior, and Nexus which connects enemies together and allows them to killed (or knocked out) simultaneously. Given the number of Visionaries, there are at least three more abilities we’re yet to learn about but there are definitely other avenues of power available. 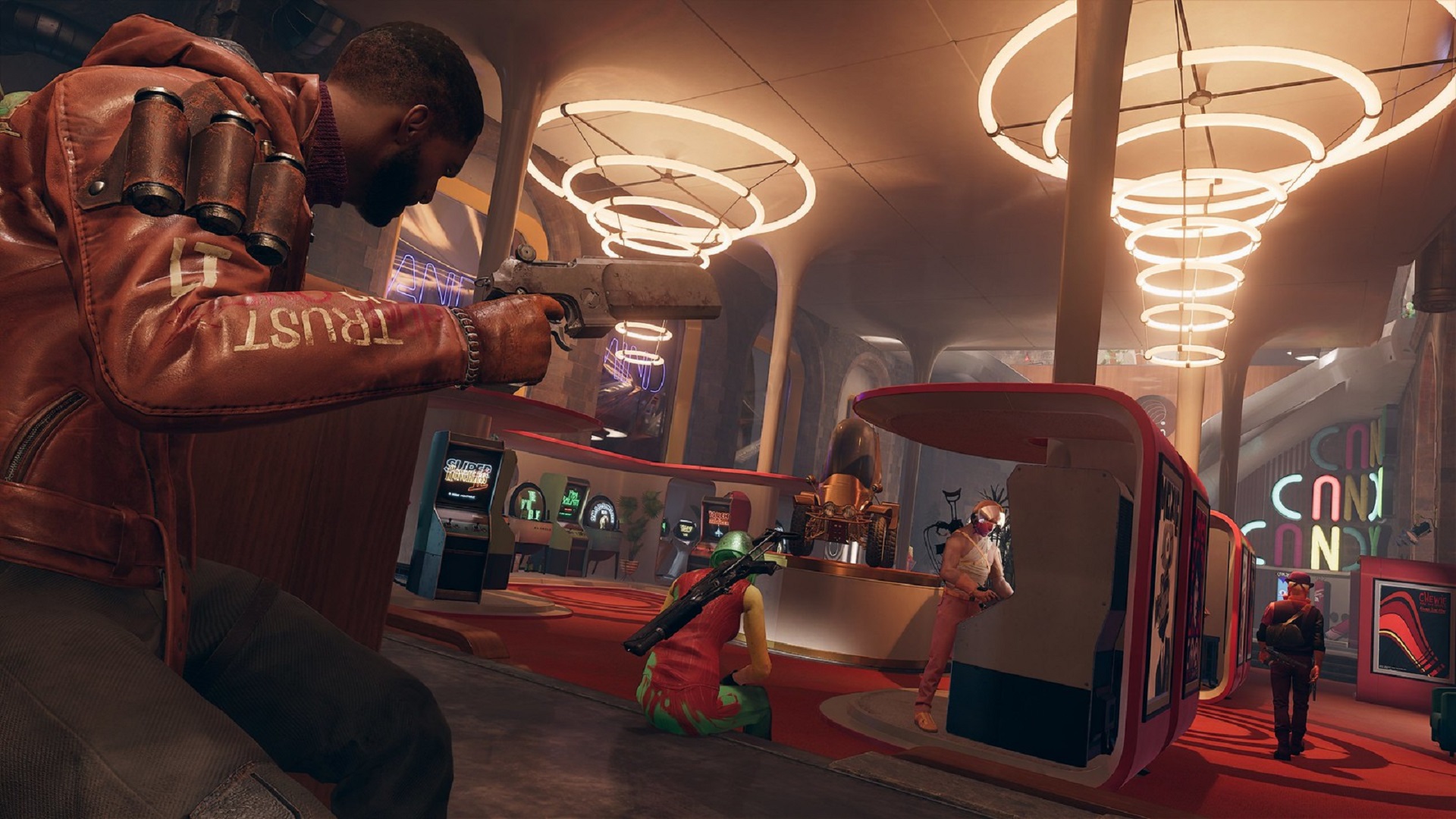 Trinkets are items that provide different bonuses and can even change a weapon’s properties. Speaking to IGN during its 2021 Fan Fest, director Dinga Bakaba confirmed Trinkets providing bonuses like increased speed and agility along with recovering health from assassinations. If this is anything like Dishonored’s Bone Charms, then expect increased healing from items, longer duration of abilities, and so on. 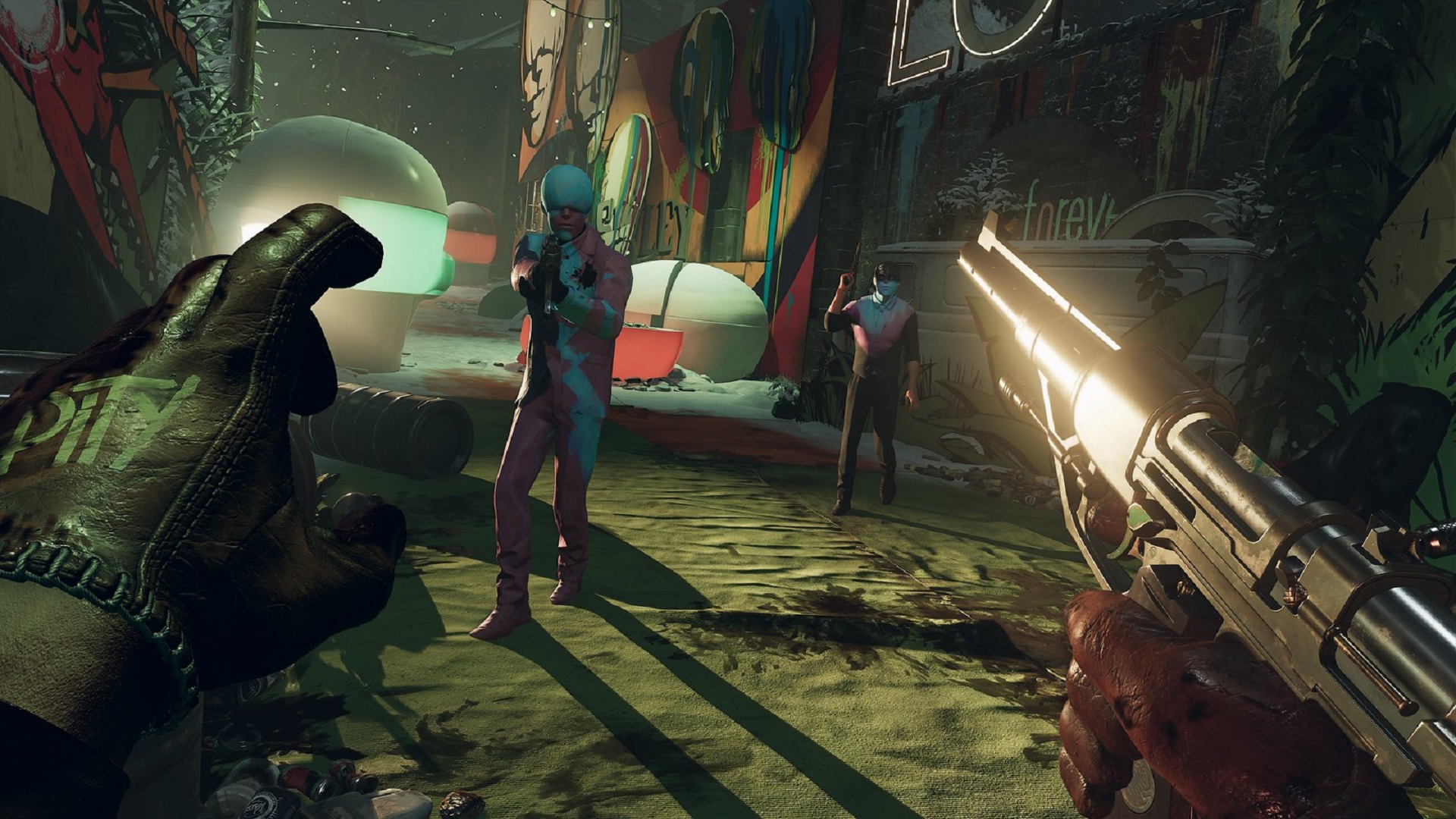 Since the PS5 launched, a number of developers have been using the DualSense’s haptic feedback and adaptive triggers in unique ways. In Deathloop, the triggers will be locked if a weapon jams. While unjamming it, the character’s strikes can be felt through haptic feedback. Interestingly, when a weapon’s ammo is depleted, you’ll have a different sensation as compared to pulling the trigger to fire. Other unique implementations include climbing and sliding providing different feedback (which can change based on the terrain) and the controller’s speakers being used for gun noises, the sounds of bullets narrowly missing and even radio messages from Julianna. 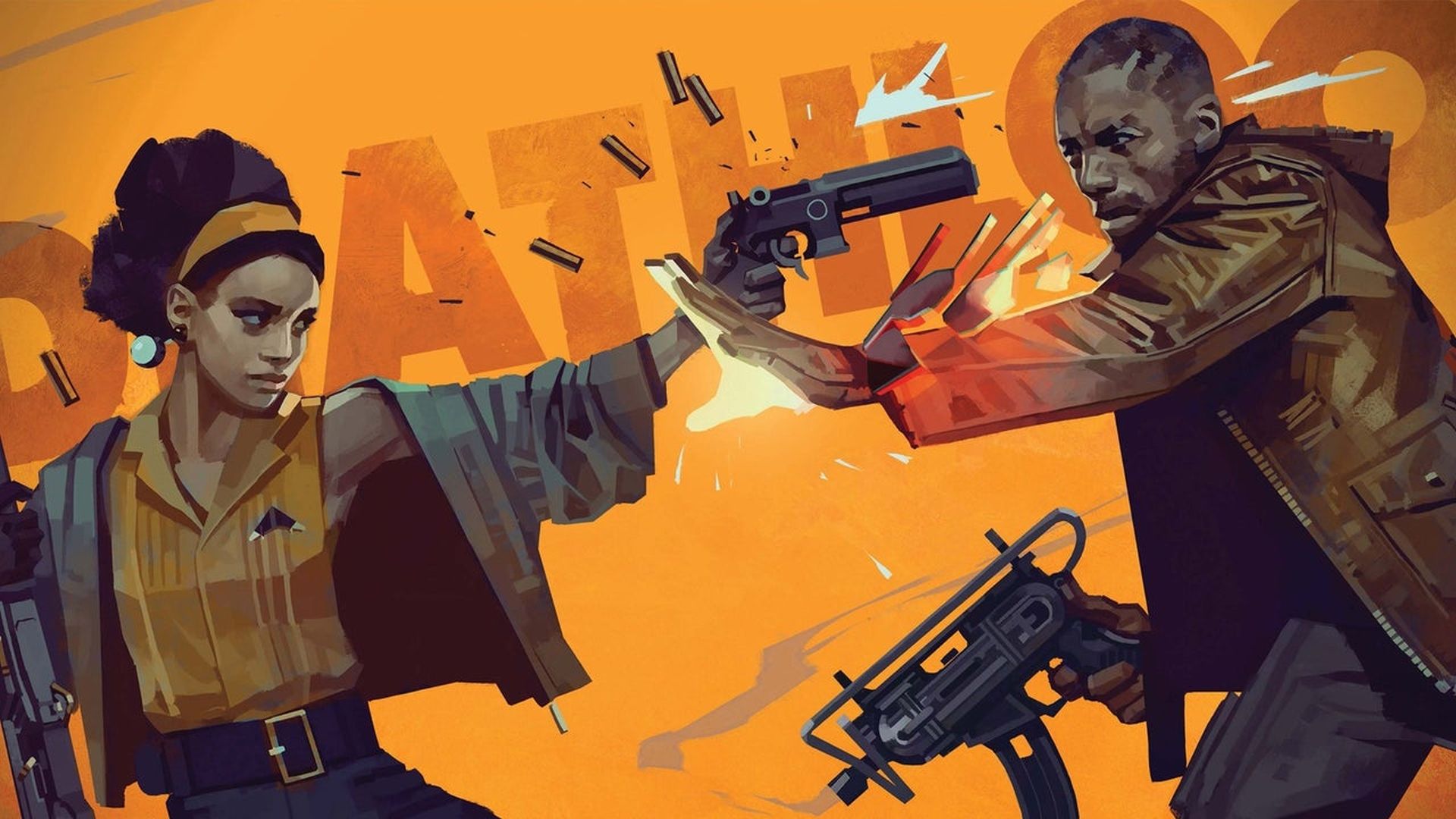 In terms of presentation, Deathloop opts for more highly-stylized visuals as opposed to photo-realism. But the sultry 60’s style aesthetic will still look very good on PS5 in 4K resolution and 60 FPS. Ray traced shadows and ambient occlusion are also confirmed for the console version, adding that extra bit of oomph to the environments and lighting. 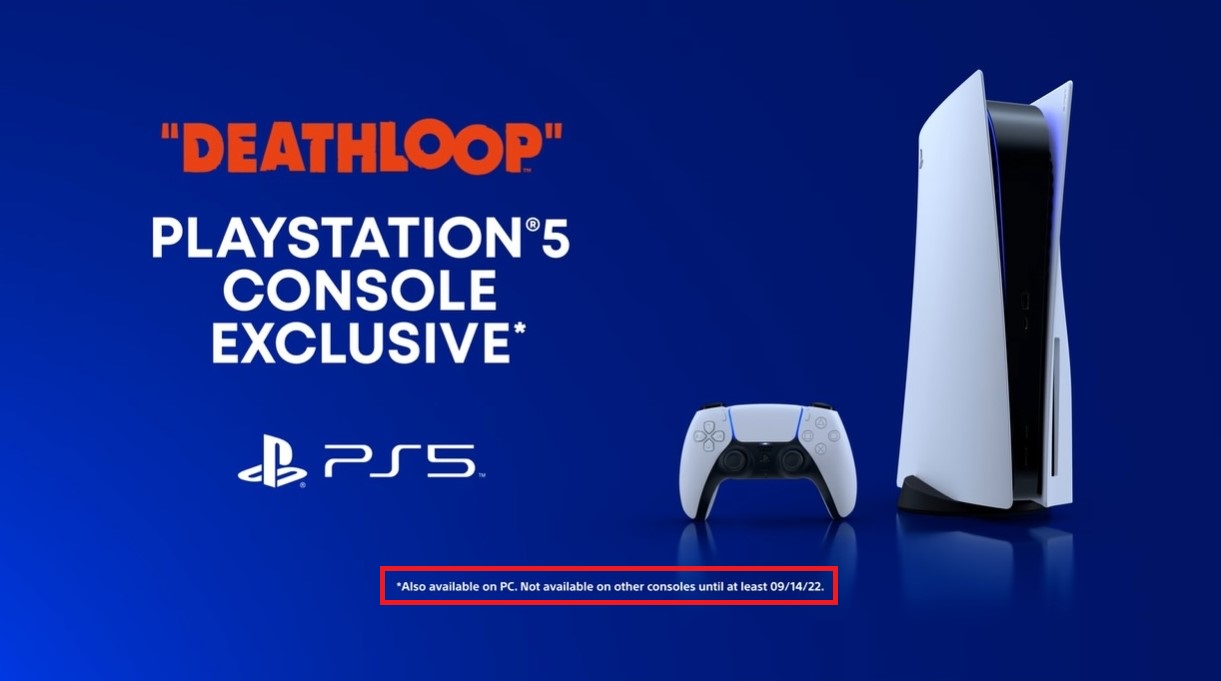 One of the biggest selling points for Deathloop is that it will be a one-year timed exclusive for PlayStation 5. Though the exclusivity deal was penned before Microsoft acquired Bethesda and ZeniMax Media, it will still honor the arrangement. The exclusivity period is slated to end on September 14th 2022, exactly one year after its PS5 launch so if you’re looking to play it on Xbox Series X/S, you’re going to have to wait. 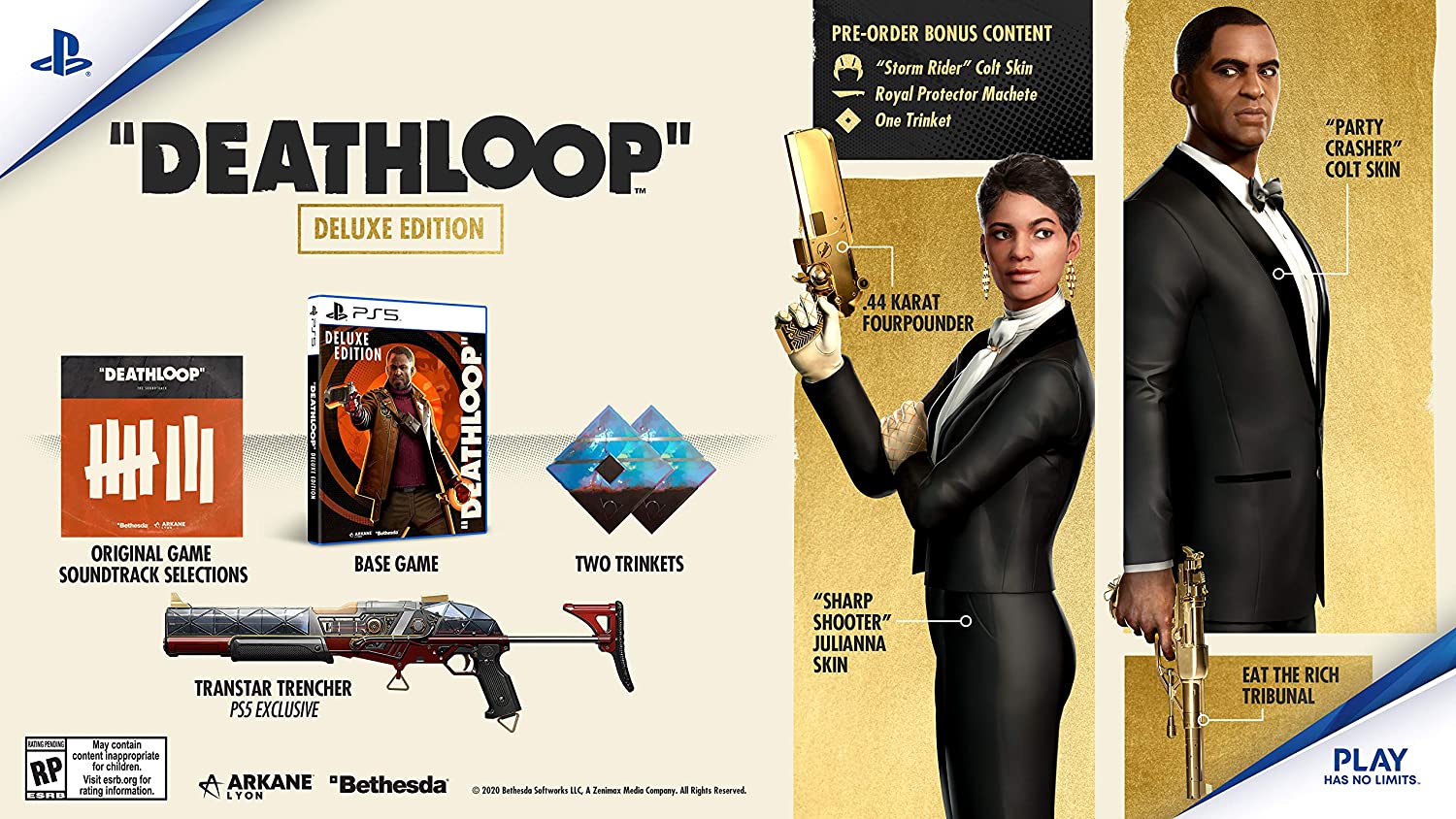 As is often the case for high-profile titles in this day and age, there will be pre-order bonuses available for those who pick up the Standard or Deluxe Editions. These include the Storm Rider skin for Colt and a Trinket. The Royal Protector Machete is also being offered but this is exclusive to the PS5 version. Those picking up the Standard Edition only need to pay $60.

For $80, Deluxe Edition owners receive two outfits, one each for Colt and Julianna, called “Party Crasher” and “Sharp Shooter” respectively. There’s the Eat the Rich Tribunal and .44 Karat Fourpounder weapons which sport cool golden color schemes. One also receive selections from the original soundtrack and two Trinkets. Another PS5 exclusive is offered here as well with Transtar Trencher, a shotgun inspired by Arkane Studios’ Prey (2017). 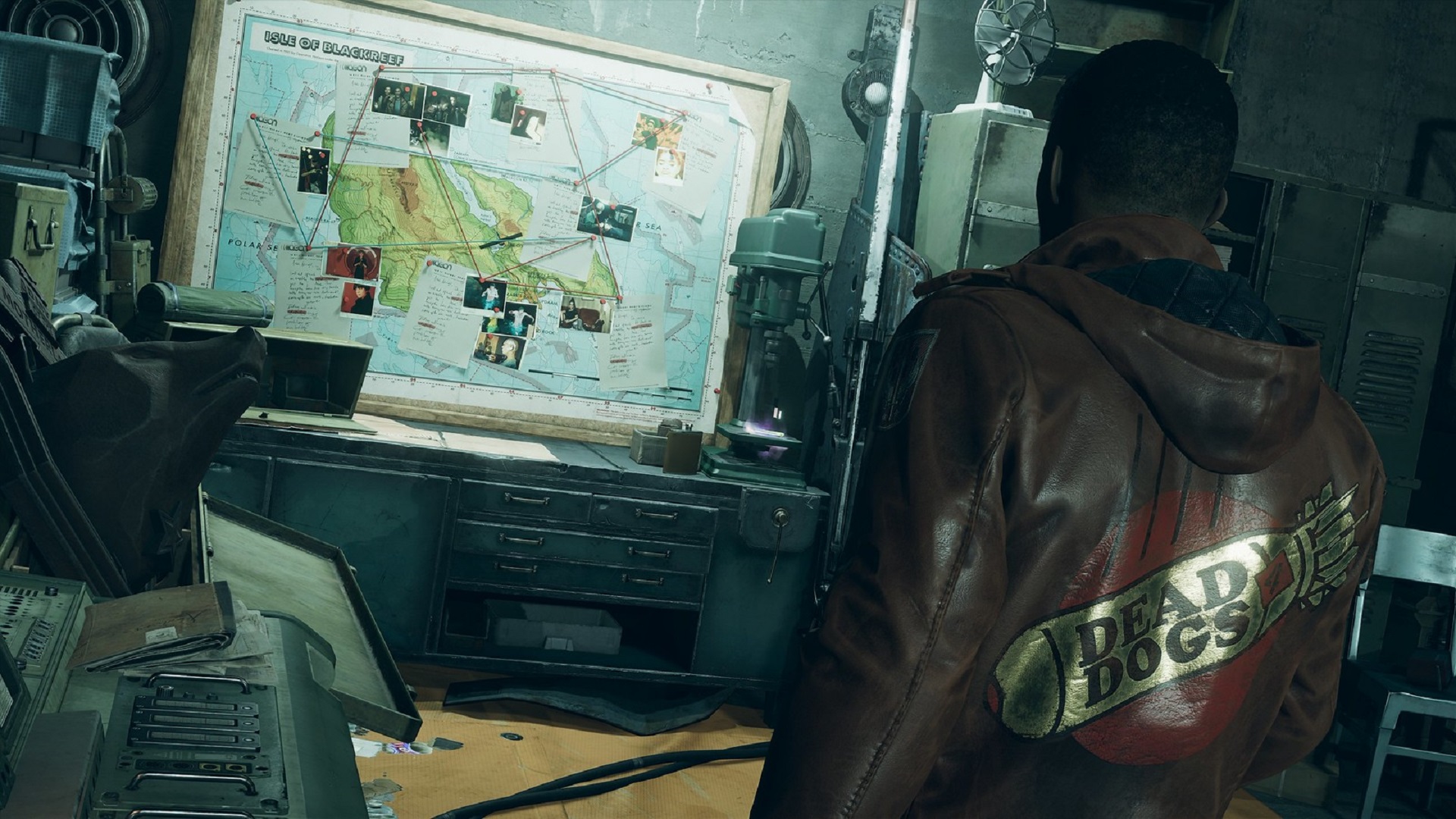 Arkane Lyon hasn’t exactly outlined how long it will take to finish Deathloop, with Bakaba telling IGN that it’s “comparable to our former games.” Dishonored 2 takes roughly 23 hours or so to complete its story along with the extra content. Prey (2017) requires 28 hours so those can be used as a rough estimate.

Nevertheless, Bakaba says that Deathloop will have “quite a chunky campaign” with “a lot of investigation involved.” That’s for anyone who’s simply trying to break the loop – there are also optional “gameplay and narrative vignettes” which can be found on the map (especially when visiting Districts at different time periods).