Rumours of delays may end up just being rumours.

Guerrilla Games’ Horizon: Zero Dawn was the subject of major rumours not too long ago when industry insider shinobi602 discussed sources informing of him as much. The developer wasn’t really surprised by these rumours and a recent flyer (courtesy of IGN Italy) for the French version has reaffirmed the release date.

As seen below, the flyer itself doesn’t indicate a release date so much as the year. Release dates can always change, especially at the last minute as titles like Battlefield: Hardline, Watch Dogs and Uncharted 4: A Thief’s End have taught us. At this point though, Horizon: Zero Dawn is a 2016 title so rest easy PS4 fans.

Horizon: Zero Dawn was revealed at E3 2015 and takes place in a post-apocalyptic future where robotic creates roam the lands. Humanity has been confined to tribes forced to hunt the beasts with old-fashioned arrows and spears (with some neat futuristic spins, of course). Stay tuned for more details on the game as E3 2016 draws near. 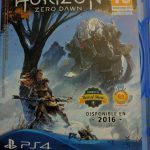