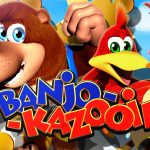 10 Video Games That Are Worth Completing 100%

Whether it's earning that complete ending or accessing a brand new route, these games ensured you were rewarded for doing everything.

Developed by Rare, the classic Nintendo 64 platformer sees Banjo and Tooie venturing to save Tooty from the evil witch Gruntilda.

Rare's classic platformer, which first released in 1998, will be added to the service next month. Additional features have yet to be revealed.

Banjo-Kazooie and Conker Revivals Are Up To Rare, Says Phil Spencer

The studio, not Microsoft, has to decide to bring them back.