Edge of Eternity is Out Now for PC, Post-Launch Roadmap Revealed

The RPG inspired by classics like Final Fantasy, Xenogears and more is finally available on PC. It will release in Q4 2021 for Xbox and PlayStation consoles. 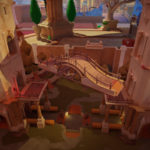 Sony outlines several indie titles coming to PS5 and PS4 in the future.