Long-time character Renne is seen in combat with her S-Craft while hacking and fishing are also showcased. The RPG is out in September for Japan.

Set between Ys 1 and 2, Falcom is aiming for a "lighter-feeling" Soulslike style of combat while introducing new gameplay elements.

The Legend of Heroes: Kuro no Kiseki 2 -CRIMSON SiN- Launches on September 29th in Japan

Coming to PS4 and PS5, the sequel has new locations, special missions where players must sneak around, and apparently branching routes.

The Legend of Heroes: Kuro no Kiseki Releases on July 28th for PS5 in Japan, PC Version Coming to Asia

The PS5 version features 4K and 60 FPS support along with a High-Speed Mode. PS4 players can also upgrade and transfer save data over to PS5.

Releasing this Fall for PS4 and PS5 in Japan, the sequel sees Van Arkride and his allies investigating a strange massacre in Edith City.

The Legend of Heroes: Kuro no Kiseki II -CRIMSON SiN- Announced, Releases in Fall 2022 for Japan

Releasing for PS4 and PS5, the latest sequel in the Trails series will continue the Calvard Saga with Van Arkride as the protagonist.

The latest RPG in Falcom's acclaimed series is out on September 30th in Japan for PlayStation 4. It's also in the works for PS5.

The new draw distance is even higher than Ultra and is meant for very-high end systems along with future-proofing the title.

The Legend of Heroes: Kuro no Kiseki – Zin, Fie and Shizuna Receive New Details and Screenshots

Zin and Fie from Trails in the Sky and Trails of Cold Steel return. Meanwhile, Shizuna is a new character with the "Divine Blade of Silver" title.

The Legend of Heroes: Kuro no Kiseki Teaser Features Crafts and Exploration

Falcom has also revealed the Spriggan Edition which contains an artbook, data file, mini soundtrack and an alternate voice for the Hollow Core. 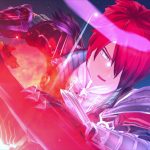 In addition to other minor fixes.