The Elder Scrolls 5: Skyrim Anniversary Edition Review – Yet Another Edition

The newest edition of Skyrim adds just enough to entice the few that have yet to play it, or perhaps missed the 8th gen version, but stops short of much else.

Much like Grand Theft Auto, The Elder Scrolls series has been coasting on re-releases of its fifth mainline game for a long time now. Bethesda has been quite content with just slapping new coats of paint on Skyrim every few years and treating it like a legitimate release. That said, also like GTA 5, this fifth game in the Elder Scrolls series still remains a legitimate juggernaut in its genre both in terms of critical reception and market viability – so the case for another edition is an easy one to make. Especially considering that with this particular release on PS5, we do know that a new, 6th entry of the long-running franchise is on the way, so one last romp in the world of Skyrim before the series totally moves on isn’t a bad idea – especially for those that haven’t played it since the original version, or the few folks left out there that somehow haven’t played it at all. While some noticeable improvements are there, it’s really the full-throated embrace of community-generated content from the die-hard Skyrim fans that has propped the game up all these years that makes the most compelling case for experiencing this re-re-release of the legendary RPG.

For those looking for a top-to-bottom remake, or even what most would consider to be an in-depth remaster of Skyrim, we should probably get this out of the way; Skyrim Anniversary Edition isn’t that. You will not find any noticeable texture work, or any other sort of uprooting of the fundamental systems of 2014’s special edition that ran on PS4 and Xbox One. In fact, if you’ve played the recently patched version of the special edition on the PS4 Pro or the Xbox One X, you’ll experience even less of an improvement on the PS5, as those versions already run at a decent frame-rate and at 4K resolution. The only difference on that front with this version is the ability to run it at 60 FPS. As mentioned, you can actually get that upgrade on your PS4 Pro for free, further removing the incentive to upgrade, though as you might imagine, you’ll see superior stability on the PS5. 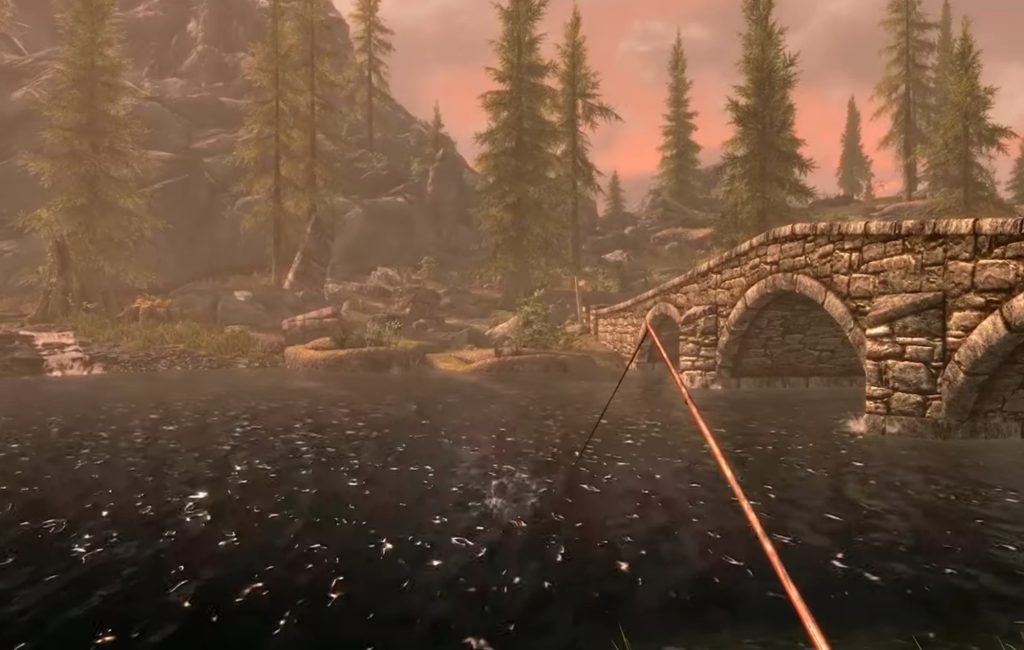 "While some noticeable improvements are there, it’s really the full-throated embrace of community-generated content from the die-hard Skyrim fans that has propped the game up all these years that makes the most compelling case for experiencing this re-re-release of the legendary RPG."

What you will get however, are some different arrangements of shrubbery, rocks, and other subtle things that are largely innocuous and just seem to serve to further optimize the game. That said, whatever few and minor performance enhancements you will notice are not why you should partake in this particular version, the real treat here is the curated list of mods to choose from and the community-oriented “creation club” that adds lots of content and options to an already wide open game. Thanks to that, this version has a wealth of extra dungeons, bosses, spells, skins, and more that easily make it something worth diving into if you’ve only played the game on consoles up to this point.

While it’s still just a taste of what PC players have been enjoying for many years, compared to what console versions of Skyrim have been in the past, this is a treasure trove. The amount of things to tinker with in this edition is quite the smorgasbord. So much so that even those who have already owned the game once or twice easily have enough reason to jump into it again. People who like different dragon skins in particular are more than covered here. That said, mods do disable trophies and achievements, which is understandable on one hand but a bit of a bummer at the same time, as a lot of the mods are just cosmetic and don’t really impact difficulty. With a game this long, having to play through it twice to have fun with mods and get the achievements/trophies might force many players to choose one or the other – and that’s a little unfortunate.

That said, Skyrim Anniversary Edition is still Skyrim. This legendary action RPG remains a worthwhile experience in all the same ways it always was. There are a lot of well-documented reasons why Skyrim is such a classic, and the game still holds on to almost all of that magic today. That said, Skyrim’s weakest area, its combat, is where the game unsurprisingly shows the most wear and tear. While Skyrim’s scope and fantasy setting still stand tall among other games that have come since, the clunky swinging of melee weapons and simplistic projectile combat has long-since been outdone by several newer games. Some tweaking in this area could have really gone a long way seeing as how games like Dying Light and Warhammer Vermintide have left Skyrim’s combat in the dust several years ago despite having a fraction of their development budget and audience size.

PS5 owners don’t even get as much as simple DualSense support with adaptive triggers, which is just plain disappointing. Considering what an obvious slam-dunk it is for every game with a bow and arrow to put some resistance on the DualSense triggers, it’s hard to describe the absence of that as anything other than dropping the ball. Perhaps with Elder Scrolls ultimately being a Microsoft property now, the aversion to adding anything special to the PS5 version might make sense on paper, but in practice, it just feels lazy. Especially considering how little is improved from the last version it is anyway. Lacking in visual improvements or gameplay improvements are generally excusable on their own for a re-release of a ten-year-old game, but neither area receiving much improvement at once can make the $20 upgrade fee seem unappetizing. Especially if the mods don’t interest you.

"Skyrim Anniversary Edition is still Skyrim. This legendary action RPG remains a worthwhile experience in all the same ways it always was."

All in all, Skyrim is still one of the best examples of when all of the elements of a great RPG come together to create a timeless experience. There is little reason for gamers of all types to not at least give it a shot, and with this version likely serving as the truly definitive one for many years to come, it’s a no-brainer for those who haven’t tried it yet. Sweetening the deal are a healthy dose of the mods and additional content that PC players have been enjoying for a while. The case for the upgrade from the most recent previous version isn’t a particularly easy one to make, but with the extra content through approved mods and the creation club, there is technically a case that can be made. Those coming off the 7th generation version however, coupled with the dwindling group of players who are still new to Elder Scrolls have every reason to consider it. The overall experience is indeed limited by the fact that it’s still, technically, a fairly old game at it’s core. But this edition brings the best of what the PC version has been with the best of what it can be on consoles right now, and when you combine that with the fact that Skyrim still holds up in most ways, you’re still getting some pretty good bang for your buck here.

Skyrim’s gameplay still holds up; Mods and extra content add a lot to the experience; Best possible performance on consoles to date.

Few enhancements to the last version outside of mods and new content; Combat has aged particularly poorly.

Final Verdict:
GOOD
While perhaps not as enticing as it could have been, the additions that this version of Skyrim offers keep it from feeling like a total cash grab.
A copy of this game was purchased by author for review purposes. Click here to know more about our Reviews Policy.