The beta will allow you to “experience most of things that you’ll be doing in the full game.”

From teases to reveal to pre-launch hype to delays, Marvel’s Avengers has had a long and eventful development cycle- but the game will soon be hitting a major landmark, with its launch scheduled for less than a couple of months from now. As such, recentlyCrystal Dynamics and Square Enix have certainly kicked the game’s marketing into gear. Now, new information on the game’s beta has also been released.

Via IGN, Crystal Dynamics have confirmed that Marvel’s Avengers’ beta period will kick off in early August. August 7th will see the beta going live for those who have pre-ordered the game on PS4. On August 14, the same will happen for Xbox One and PC, while on PS4, the beta will become open to all players. Finally, on August 21, the beta will become open to everyone across al platforms.

More details on the beta are also going to be revealed later this month, with Crystal Dynamics having announced another War Table stream for the game. While the previous stream revealed extensive new details on War Zones, Hero Missions, loot, and more, this upcoming second stream will focus on what you can expect from the game’s upcoming beta. The War Table stream is currently scheduled for July 29, 10 AM Pacific.

While we wait for those details though, creative director Shaun Escayg has teased out some tidbits about the beta’s scope, saying that it will allow players to experience a little bit of everything that’s in the full game itself.

He said: “We built the beta in such a way that you can experience most of things that you’ll be doing in the full game. That means playing a piece of the original single-player Avengers story campaign, fighting through co-op missions, experiencing hero and world progression, and exploring War Zones and DROP ZONES, a new kind of mission we’ll talk about in the upcoming War Table on July 29. This beta is meaty, but it’s only a small part of the finished game.”

Marvel’s Avengers launches on September 4 for PS4, Xbox One, PC, and Stadia. PS5 and Xbox Series X versions have also been confirmed (and both will support free upgrades from current-gen versions). 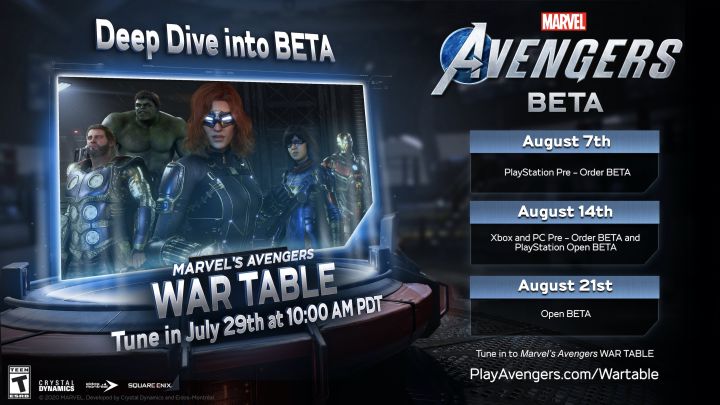