Marvel’s Avengers’ Next Hero is Bucky Barnes a.k.a. The Winter Soldier – Rumour

A prominent Avengers leaker says The Winter Soldier will be the next hero to be added to the game, though it seems the rumoured She-Hulk addition has been delayed.

Marvel’s Avengers and Guardians of the Galaxy Included in Sale to Embracer Group, Could Require Disney’s Approval

The two Marvel games lost Square Enix $200 million in a little under two years and were responsible for the sale of western studios to Embracer, according to an analyst.

Jane Foster's moveset and abilities "will have a lot in common" with that of Thor, with more details on her arriving later.

Crystal Dynamics has suggested a workaround to avoid a new bug that's causing crashes for PS5 players- but using it will delete all of your campaign progress.

Marvel’s Avengers Patch 2.3 Has Been Delayed

"We're taking some extra time on Patch 2.3 to ensure our new tuning and mission on-boarding are ready-to-go," Crystal Dynamics says.

Marvel’s Avengers’ Next Patch Will Overhaul the War Table

Crystal Dynamics is also looking to improve the onboarding process for new players, primarily by bringing Nick Fury to the Helicarrier as a guide.

While Crystal Dynamics is still quite reluctant in sharing the next big Marvel's Avengers Roadmap, they have, however, given players a sneak peek on what to expect from the upcoming update 2.3.

"We also can’t wait to share more about our long-term plans and will do so as soon as our teams finalize development and launch schedules," Crystal Dynamics says.

The superhero co-op game will be getting a new update this week, which was confirmed by a Crystal Dynamics PR Twitch account. 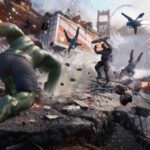 According to a known leaker, She-Hulk will be added to the game's roster of playable heroes, and will be played by actress Krizia Bajos.

Here's how to hit the new Power Level Cap, access the Discordant Sound Klaw Raid and also unlock Spider-Man as a playable character.

Along with battling Klaue in the new raid, PS4 and PS5 players can partake in a new Hero Event to unlock Spider-Man later today.

The PlayStation-exclusive hero comes with a variety of abilities from a Web Bomb to a Spider Drone, and can inflict the Webbed status.