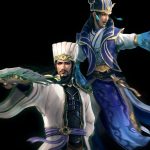 Army Affinity, Secret Plans and much more can be expected on top of all the usual intrigue, strategy and castle sieges.

Get a look at the upcoming musou update.

Partake in diplomacy and Siege Battles alike for current and next-gen platforms.