A now-deleted tweet suggests Challenger Pack 2 is coming to Smash in a couple of days.

Super Smash Bros. Ultimate is about to get its second character from the Fighters Pack – and its third downloadable post-launch character overall – soon with Dragon Quest’s Hero. Nintendo will be releasing an over twenty minutes-long video tomorrow going over the character in great detail and revealing all the new content that he brings along with him, while also confirming the exact date said new content will be added to the game- but Nintendo themselves may have accidentally let slip what that date will be a bit prematurely.

Recently, Nintendo of Europe’s Twitter account put up what seemed like a regular update, telling fans that with Version 4.0.0 of Super Smash Bros. Ultimate on its way soon, replays in the game’s vault will have to be converted if players want to keep them- it’s a tweet that Nintendo sends out before all major updates for the game. This tweet, however, also mentioned that the update lands on July 31st, just a couple of days from now.

That, of course, is significant because both such updates in the past have come with new characters being added to the game. Piranha Plant was added to the roster with Version 2.0.0, while Persona 5’s Joker arrived with Version 3.0.0. It follows that Dragon Quest’s Hero would be added with Version 4.0.0. The fact that Nintendo of Europe have since deleted the tweet should be even further evidence. Of course, that doesn’t mean it’s absolutely certain, but it seems pretty likely. Take a look at the screenshot of the tweet in question below (via Nintendo Life).

Super Smash Bros. Ultimate is in line to receive three more Challenger Packs after the Dragon Quest one. The contents of the final two remain unannounced so far, but Banjo-Kazooie will be joining the roster this Fall. 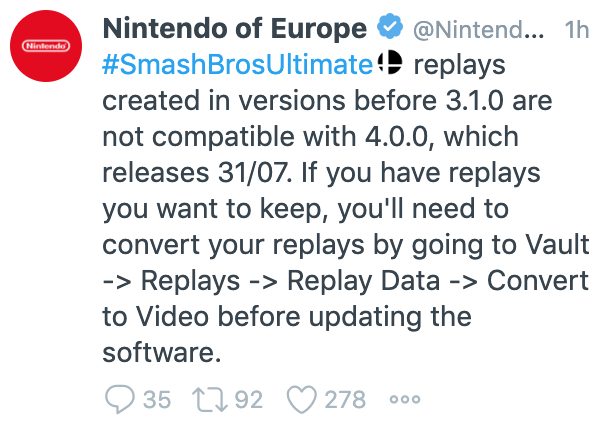