Archive For the king of fighters 15 Tag 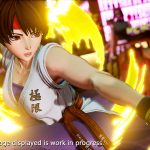