Eidos Montreal's Guardians of the Galaxy releases next month, and might just be one of this year's finest experiences.

The game's download size on PS5 will be 41.234 GB without the day one patch, with pre-loading being available starting October 24.

Jean-François Dugas says that putting people in the middle of the dynamic of the other characters as a 'leader of misfits' felt like an interesting design choice.

Senior creative director Jean-François Dugas says the action-adventure title was already "deep in production" when Avengers came out, and decisions regarding DLC had already been made.

Art director Bruno Gauthier-Leblanc talks about the design philosophies of the two characters, and how they tie into both story and gameplay.

The queen of Seknarf Nine and leader of the Hellraisers is an imposing figure, and will play a major role in Eidos Montreal's adventure. 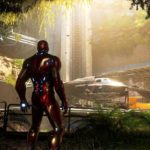 Get full and complete access to the game for a weekend on select platforms. Xbox platforms are also in talks for their own weekend later.

The developers of Marvel's Guardians of the Galaxy believe that since they're making a single player-only game, they can focus fully on building a compelling narrative.

Marvel’s Guardians of the Galaxy Has Twice as Much Dialogue as a Deus Ex Game, Developer Says

"The more time you give the game, the more it's going to give back - it's that kind of a game," says senior gameplay director Patrick Fortier.

According to the LinkedIn profile of a former Eidos Montreal developer, the upcoming single player-only title was once meant to have an online component as well.

Motivate (or calm) your AI teammates with a speech based on an in-game song to receive power-ups, full health and other benefits.

Eidos Montreal is making an action-adventure game based on Marvel's beloved band of misfits- here's what you should know about it.

The recently announced single player action-adventure game confirms a Switch release as well, much to the surprise of many.

Executive narrative director Mary DeMarle says it's "very important" that players can access everything in the game on day one.

Marvel’s Guardians of the Galaxy Shows off Combat, Choices, and More in Extensive Gameplay