In the latest episode of the Let's Go video series, we see the game's entire map and its impressive size and amount of biomes.

Playground Games will be hosting another weekly stream for the upcoming open world racer tomorrow, so be prepared for new details.

Playground Games' upcoming open world racer is leveraging the Xbox Series X hardware in impressive ways, in spite of the fact that it's coming to the Xbox One as well.

Playground Games' upcoming open world racer is making all the right promises, and we can't wait to get our hands on it.

Playground Games shot over 400 hours of sky photos to provide over seven times the number of sky presets than the previous title. 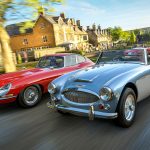 With E3 2021 finally behind us, let's take a look at all of the big new titles announced. Whether it's new IPs or sequels, there's a lot to look forward to.

Microsoft have announced the next instalment in Playground Games' open world racing series- here's what you should know about it,

Expansions, additional vehicles, and other additional packs are going to be included in the open world racer's Premium Edition.