Jeff Grubb says he's "hearing" about a potential delay but that it's not a "sure thing." Next State of Play is also apparently in September.

Guerrilla Games Has Been Working on a “Secret” Game Since 2018

An unannounced project being led by former Rainbow Six Siege director Simon Larouche has been in the works at the studio for over three years.

Game director Mathijs de Jonge says that having to develop the game for the PS4 hasn't limited the developer's vision in any way.

Horizon Forbidden West Has Some Destructible Environments, But Not “Full-Scale Destructibility”

Game director Mathijs de Jonge explains that though there is some destructibility, "it's not like the entire world can be destroyed." 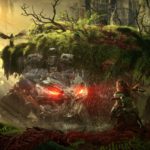 Horizon Forbidden West is “in the Final Stages of Development”

"There's still a lot to do with a game of this size and magnitude, but we're in the final stages," says game director Mathijs de Jonge.

Players will be able to climb anywhere in the wild frontiers of the Forbidden West. The map design is also a "little bit bigger" with more density and content. 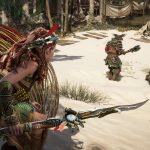 Upgrading armor and weapons will now provide access to new skills and damage/ammo types. Resources are gathered from plants, animals and machines. 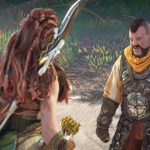 Aloy will also spend more time with her companions, both in the main story and side quests as per narrative director Benjamin McCaw.

Horizon Forbidden West – A Lot of Development, Playtesting is Done on PS4

"We are ensuring that owners of that console will have a great experience" and that it will "look fantastic" says game director Mathijs de Jonge.

Horizon Forbidden West Will Have a 60 FPS Mode on PS5

Guerrilla Games confirms that the upcoming open world action RPG will have a Performance Mode on the PS5, for those who want to play the game in 60 FPS.

Valor Surges are new powerful skills that can be activated when charging their respective bar. New ones can be unlocked from the overhauled skill tree.

PlayStation Studios head Hermen Hulst says the company is "working as hard as we can" to confirm the release window "as soon as we can."

Guerrilla Games have revealed a ton of new details about the upcoming open world action RPG. 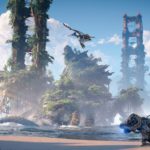 Horizon Forbidden West State of Play Confirmed for May 27

Tune in for a 20 minute-long gameplay reveal of the upcoming open world action RPG.