"It will be launched when ready.” Critical decision made to ensure "most amazing experience."

For Honor Campaign Offers “Full Story”, Players Will Be “Satisfied”

For Honor's campaign is a "full experience" according to dev. Cinematic trailer explains why these factions are fighting.

And that it will have some kind of cross brand promotion with Ray Ban. 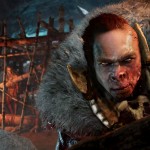 Does Primal run better on the PC than its predecessor? Along with a host of improvements. PS4's better AA solution and slightly higher resolution pushes it ahead of the Xbox One build.